“I’ll make some winch covers!  How hard can they be?”,  I thought.  Ha.  By the time I was finished I had thrown away the first three, still wasn’t entirely satisfied with the remaining five, and had taken to calling them “*$#@%%* winch covers!”

Much to our pleasant surprise, Pegu Club came with five winches that had clearly been upgraded from her original stock winches.  They are all oversized and self-tailing, and the two largest are two-speed winches.  Two-speed winches have a high and low gear which allows you to crank the lines in a lower gear (by reversing the cranking direction) as it becomes more difficult.  Buying them all new would approach $3,000, something we never would have done.  Her original winches would have been fine, but the bells and whistles on these are certainly nice to have.

Now bear in mind that as far as I can tell, a winch cover is truly unnecessary.  Sure, I didn’t like how rainwater would just stay in the hole for the winch handle but it’s not like it was going to hurt the winch.  Heck, Little Bristol was built in 1975 and had her original winches – likely never covered – and they were fine.  Nope, I just wanted to make them because I thought it would look spiffy.

On paper it looked simple.  Measure the circumference and height of the winch, cut two appropriately sized rectangles and a circle, hem the edges, create a sleeve to insert the shock cord in the smaller rectangle, and sew the ends of each rectangle together.  So far so good, and I was happy with the result.  Then it all went to hell.

I sewed the circle into the tube and promptly threw it away.  Yes, I had a seam ripper, but this “thing” that was supposed to be a winch cover was beyond redemption.  Then I tried again.  Same result – into the trash.  The third time was not the charm.  Now I was mad.

After I had my little temper tantrum, I posted on the Sewing on Boats Facebook group looking for advice.  This is a great group of people who are always willing to offer kudos and encouragement.  I read all of the feedback – the part about perfect being the enemy of good was particularly helpful – and plunged back in.

The fourth winch cover qualified as winch cover number one.  It’s hard to get it to stand straight up, but I snapped a photo anyway: 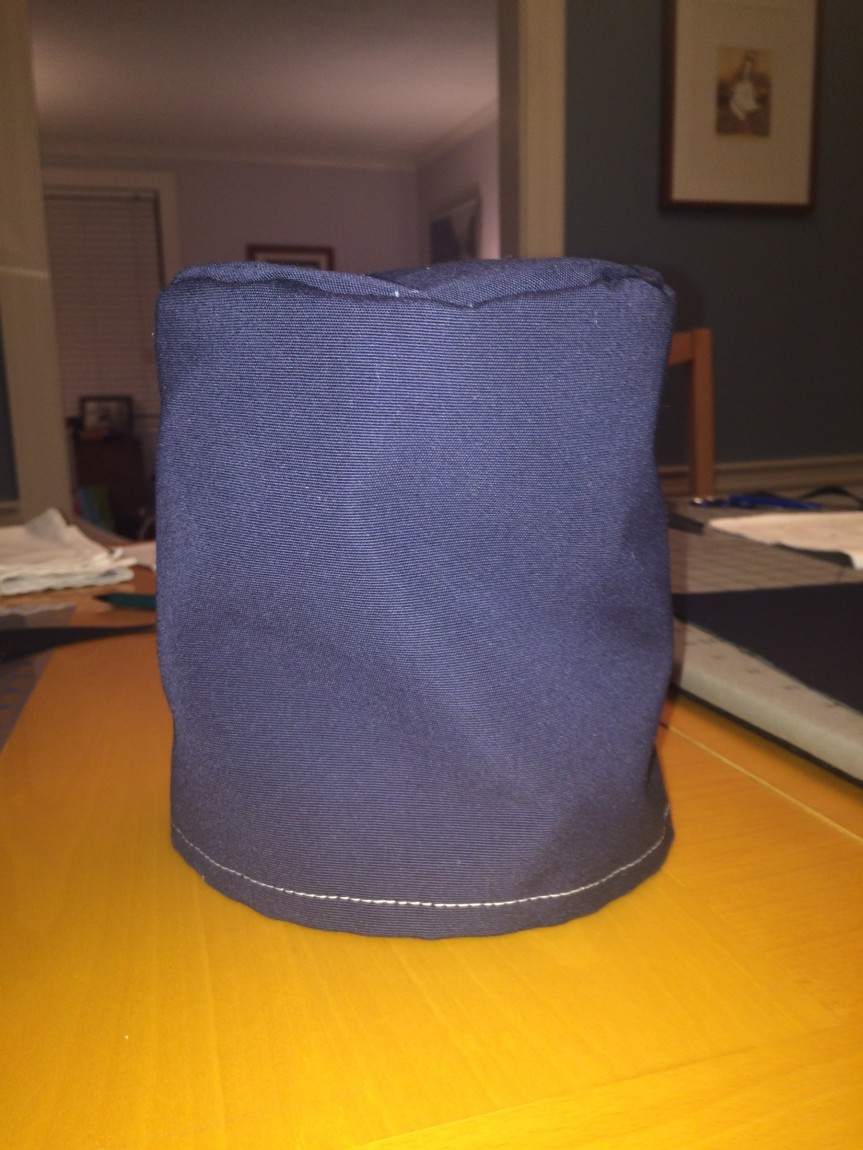 Number two (which was really number five) wasn’t quite as good, but I recalled a post that mentioned the ten foot rule – if it looks good from ten feet away then it’s good enough.  The last three were finally finished after much gnashing of teeth and a short-lived search on Defender’s website to see how much it would cost to simply buy them.

After countless hours, I had five winch covers with which I had varying degrees of satisfaction.  A glutton for punishment, I briefly debated continuing to try until I had five that I was thoroughly happy with, but reason prevailed.  Besides, I had also run out of navy Sunbrella.  It was time to consider this project complete.