After taking care of our propeller shaft stuffing box last fall, it was time to turn our attention to the rudder shaft stuffing box.  Jeff had noticed during last season that the hose surrounding the stuffing box was very old with many signs of serious cracks.  Given that a rupture of the hose would result in a significant amount of ocean water coming into the boat, we knew we needed to take care of it this offseason.

Unable to find anything online about servicing the rudder shaft stuffing box, we were essentially going to have to go in blind for this project.  Not surprisingly with a 40 year old boat, its been a challenge, and unfortunately we’re not finished yet.

Some disassembly was required before we could begin.  The rudder shaft stuffing box is located underneath several pieces of wood, which in turn is underneath the steering drive wheel, which is underneath a wood cover.  Removing the first wood cover was easy.  After that it became more difficult.

In order for the steering drive wheel to be removed, Jeff had to remove the bolts that were holding the cable in place.  They look like you should be able to simply turn them, but since they hadn’t been in touched in who-knows-how-long, it was a bit of a struggle. 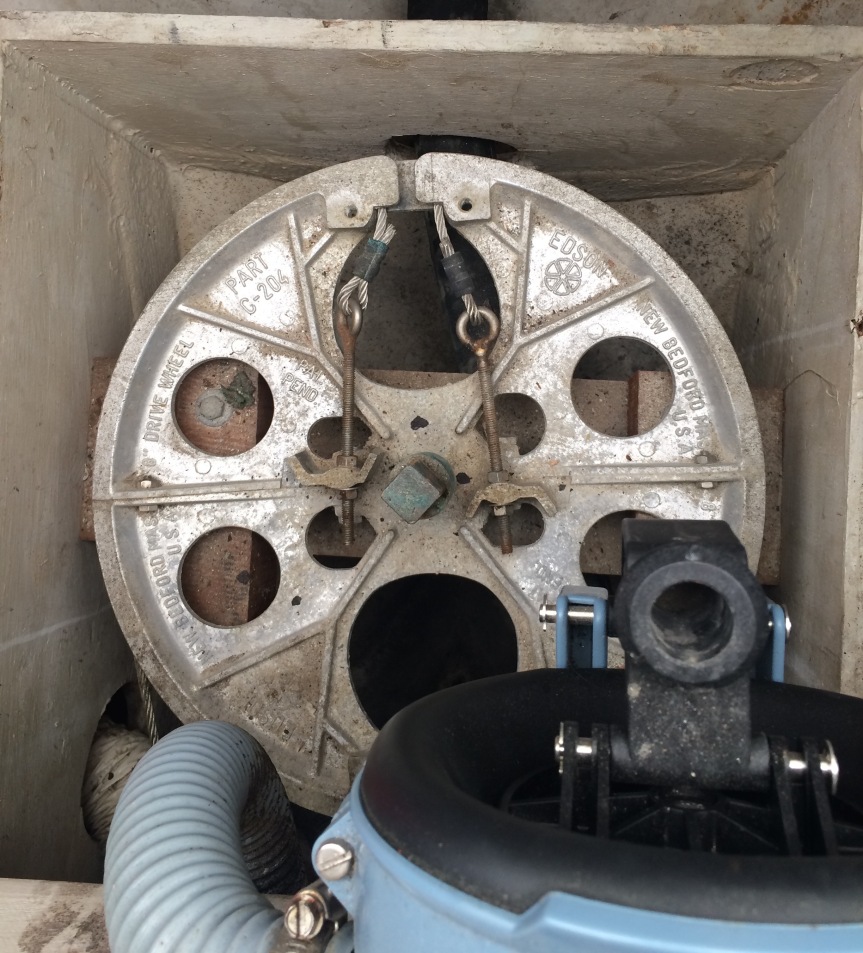 Fortunately this was a bit of a twofer, because we’re going to get a new steering chain and cable this spring so we would have had to remove this piece anyway.  And I’m using the word “we” liberally since Jeff is really the one who is doing all of the work.  As you can see by the next picture, this is a one-man job: 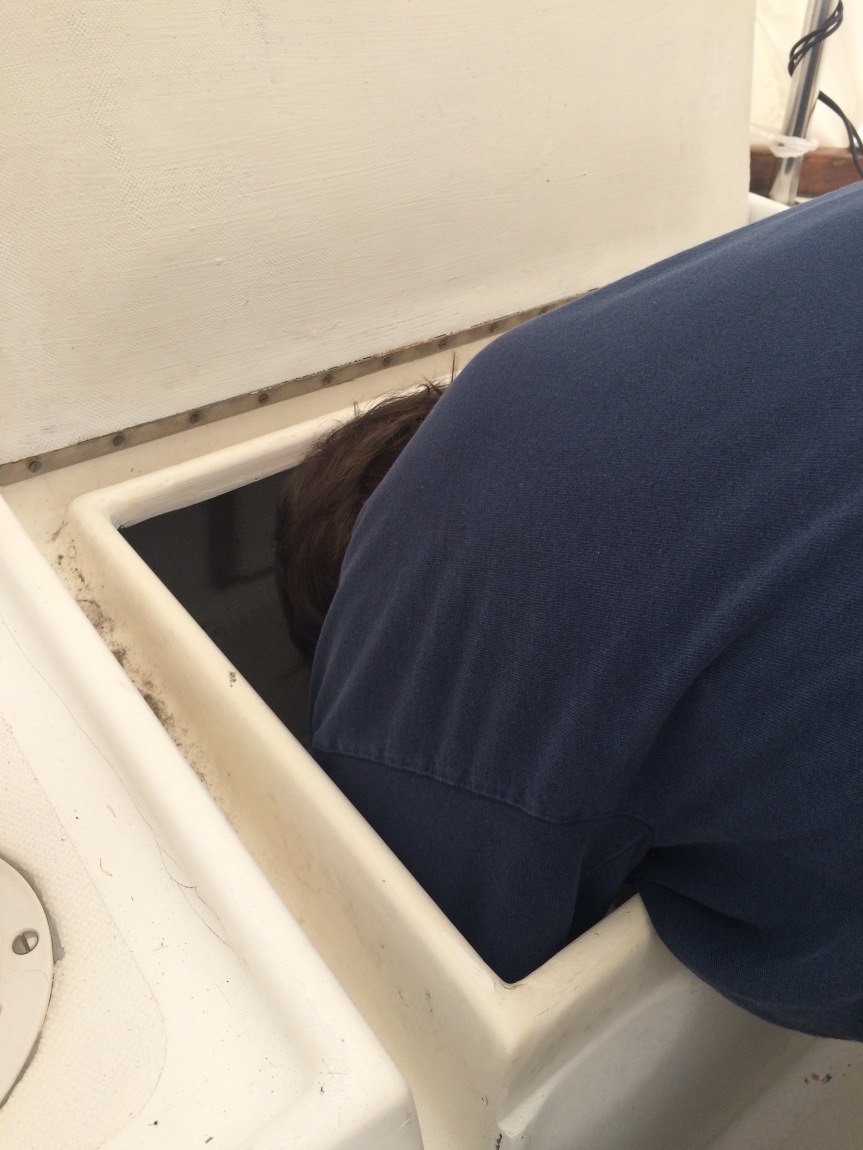 Once the steering drive wheel was out, Jeff’s next challenge was this:

The diamond-shaped metal piece in the center is the top of the rudder shaft.  We needed to access the shaft, so the wooden board had to be removed.  The wood was held in by four bolts that were on either side of the box.  While they weren’t visible, Jeff could feel them when he put his hand underneath the wood.  The bolts were stubborn, but they eventually succumbed to Jeff’s will.  Now he was looking at this: 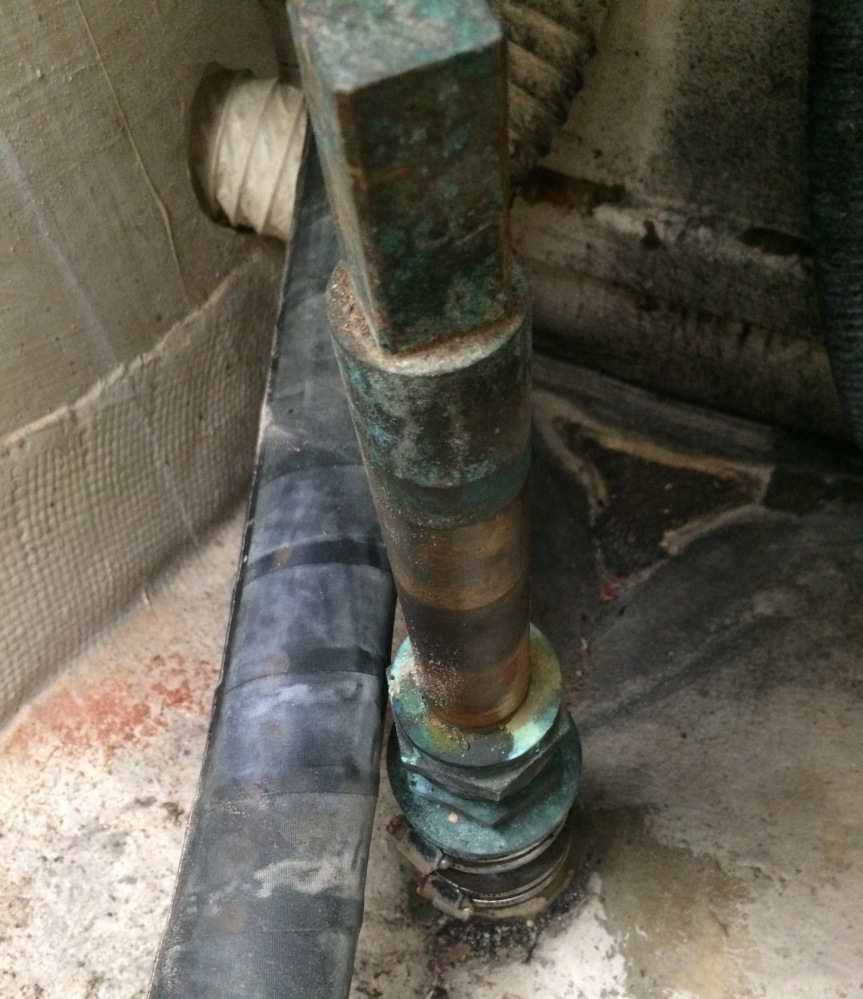 A close up (you can see the offending hose at the bottom):

The rings and nuts came off with surprisingly little effort.  This was going well so far!  Then it got hard:

Below is the offending hose that started this whole thing.  You can see all of the cracks – and that’s the good side of the hose.  The other side had areas where the cord was exposed.  It’s definitely time for a new hose.

After using PB Blaster and an assortment of wrenches, we weren’t getting anywhere.  It was clear we were going to need to crowd source this issue.  Fortunately, Bristol owners have an active Facebook page and Yahoo Group, so I posted on Facebook and received several good suggestions.  We won’t be back at the boat until Friday the 14th, but with a 3 day weekend to work on it I’m confident that we’ll conquer the corrosion before that weekend is finished.  Onward!

17 thoughts on “That sucker is stuck.”