First things first – a few pictures from our sail to Block on 9/7.

We went to Block Island last year for our fall cruise and really enjoyed it.  Block Island is thirteen miles off the coast of Rhode Island.  At just under 10 square miles,  it has been named one of the “Last Great Places” by the Nature Conservancy with forty percent of the land set aside for conservation.  If you don’t visit during the summer season it’s a peaceful getaway with plenty of hikes, beaches, and shops to poke around in.

Our first morning there we were greeted with a beautiful sunrise:

The weather forecast looked great, so Jeff and I decided to rent bikes and explore around the island.  Initially we were going to keep the bikes for two days and use them as our main mode of transportation, but we were ready to turn them in by the end of the day.  We are both so used to our bikes that are dialed in perfectly to fit us, that even though the frame size for the rentals were fine, we were still experiencing sore knees, elbows, etc. by the end of the afternoon.  Deciding to stick to walking for the rest of our trip was a no-brainer, but it was worth it for the day to easily get to views like this:

Residents claim that Block Island has 365 ponds – one for each day of the year.  This one was particularly striking:

We also rode our bikes to Coastguard Beach which is where we took the pictures of the channel leading into the Great Salt Pond in the previous post.

Back on the boat that night we were down below making dinner when I glanced out the window in time to see what is easily one of the most beautiful sunsets I’ve ever witnessed.  Although we didn’t know it at the time, this trip was going to have several gorgeous sunsets, but this one in particular was amazing.  The water was as red as the sky.  Honestly, the pictures don’t do it justice. 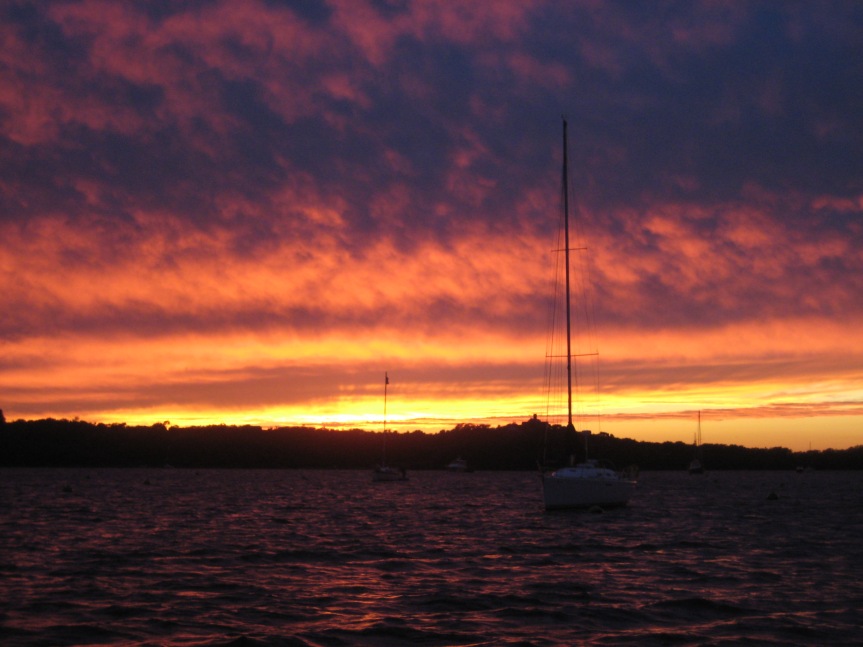 We had only planned to stay until Wednesday, but late Monday afternoon the winds started howling at a steady 16+ mph with gusts in the mid-20’s, night and day, and they weren’t forecast to stop until late Wednesday afternoon.  Heavy waves and a small craft warning were going to accompany the winds, so we decided to extend our visit until Thursday.  We had a lovely time relaxing, going to the Farmer’s Market, browsing in the shops, charging our electronics in the library, and watching plenty of boat t.v..

This boat was our favorite, however:

I have to admit that the howling wind started to get on my nerves by the second night.  Fortunately our sleeping position from the mega-bed kept the rocking feeling to a minimum, but the wind was just so darn loud.  It was the first time we’ve been on the boat overnight in those conditions (typically we would have just stayed home), but I reminded myself that if I want to live on a boat upon retiring then there will be plenty of nights like this, so I needed to get a bit more zen about it.  Mission accomplished.

As predicted, by late Wednesday afternoon the winds started to calm down.  Although they were going to pick up again Thursday afternoon, we had a small window of opportunity to head over to Narragansett Bay on Thursday morning so we decided to grab it.  We spent our last evening watching “High Noon” with Gary Cooper on our “media center” (iPad and Bose portable speaker), and went to sleep excited about continuing on our journey the next day.