Due to vacation availability and our schedules, June 24th through July 2nd marked our first vacation in eleven months – we were WAY overdue!  The plan was to head to Block Island on Saturday morning and then spend the rest of the week in Narragansett, but we have learned in the past that vacation plans are written in sand.  This one proved to be no different.

We started improvising right away on Saturday when we woke up to pouring rain.  Because we had spent the previous weekend at the SSCA Gam in Essex, we still had several things to take care of before we could leave: put in our reefing lines, insert cotter pins and tape the turnbuckles, top off our water tanks, fix the wind instrument, buy a dinghy at Defender, etc.  Wait a minute!  Buy a dinghy at Defender?  Yes, after thinking about it for several months we had reluctantly come to the conclusion that we needed to sell our beloved Pegu-teeny and buy a – gasp! – inflatable.

END_OF_DOCUMENT_TOKEN_TO_BE_REPLACED

Tuesday, July 12th (yes, I’m behind on my blog posts) we set sail for Newport.  The winds were supposed to start off light and then fill in, so we ghosted along the coast of Fishers Island under the jib alone, and headed out through Watch Hill Passage.

The promised winds arrived, but unfortunately they were right up our bum so we were crawling along at 3 1/2 knots.  Upon turning into the wind to raise the mainsail so we could switch to wing and wing, we realized just how good the wind was so we made a command decision to bang a right and head to Block Island instead.  Sure it was the middle of the summer, but it was Tuesday.  How crowded could it be?

END_OF_DOCUMENT_TOKEN_TO_BE_REPLACED

This past weekend marked our fourth annual sailing trip to Block Island.  We had spent the prior windless Saturday installing our solar panel (the subject of a future post), and Sunday was mostly windless so we continued doing small projects and getting the boat ready for our mini-vacation.  We were psyched because the weather forecast for the holiday weekend looked great and we were going to be hosting our friends Vanessa and Kurt for two nights – our first overnight guests of the season!

Jeff and I had taken a few extra days off to get a jump start on the holiday weekend, so on Wednesday we drove down to Shenny.  It was a sunny, warmish day with great winds, and we were really looking forward to seeing how Pegu Club would do. END_OF_DOCUMENT_TOKEN_TO_BE_REPLACED

Friday saw us tossing off the mooring line at 7:00 a.m.  It was chilly but sunny, and the forecast called for light winds out of the southwest until 9:00 a.m. or so when they would begin to steadily build, along with the seas.  Having learned what “building seas” meant during our first trip to Block, our goal was to be in the Great Salt Pond before it started blowing over 20.

What followed was a lovely sail – our best one yet to Block.  19 NM, 5 hours.  We motored for a few hours, and then, true to the forecast’s word, we were able to to turn off the outboard and sail the entire rest of the way.  And I mean the entire way.  We were feeling great: sunny, 59 degrees on the water, 12-15 knots of wind, a beam reach the entire way.

I started thinking about how some of my co-workers had told me that they used to sail into the Great Salt Pond.  Filled with confidence, I suggested to Jeff that we give it a go.  We figured that it was early on a Friday so the channel wasn’t going to be crowded, the winds were perfect – why not?  So we did.  We did turn on the outboard before we entered the channel, keeping it in neutral, just in case things got out of hand, but we didn’t put it in forward until we turned into the wind to drop the sails.  It was awesome! I felt very salty, and I proudly told the Harbormaster that we had sailed into the Pond when she showed up a few minutes later to collect our mooring fee.  I’m sure she was thinking, “Newb” the whole time, but I didn’t care.  I was PSYCHED. END_OF_DOCUMENT_TOKEN_TO_BE_REPLACED

First things first – a few pictures from our sail to Block on 9/7.

We went to Block Island last year for our fall cruise and really enjoyed it.  Block Island is thirteen miles off the coast of Rhode Island.  At just under 10 square miles,  it has been named one of the “Last Great Places” by the Nature Conservancy with forty percent of the land set aside for conservation.  If you don’t visit during the summer season it’s a peaceful getaway with plenty of hikes, beaches, and shops to poke around in.

Our first morning there we were greeted with a beautiful sunrise:

The weather forecast looked great, so Jeff and I decided to rent bikes and explore around the island.  Initially we were going to keep the bikes for two days and use them as our main mode of transportation, but we were ready to turn them in by the end of the day.  We are both so used to our bikes that are dialed in perfectly to fit us, that even though the frame size for the rentals were fine, we were still experiencing sore knees, elbows, etc. by the end of the afternoon.  Deciding to stick to walking for the rest of our trip was a no-brainer, but it was worth it for the day to easily get to views like this:

Residents claim that Block Island has 365 ponds – one for each day of the year.  This one was particularly striking:

We also rode our bikes to Coastguard Beach which is where we took the pictures of the channel leading into the Great Salt Pond in the previous post.

Back on the boat that night we were down below making dinner when I glanced out the window in time to see what is easily one of the most beautiful sunsets I’ve ever witnessed.  Although we didn’t know it at the time, this trip was going to have several gorgeous sunsets, but this one in particular was amazing.  The water was as red as the sky.  Honestly, the pictures don’t do it justice. 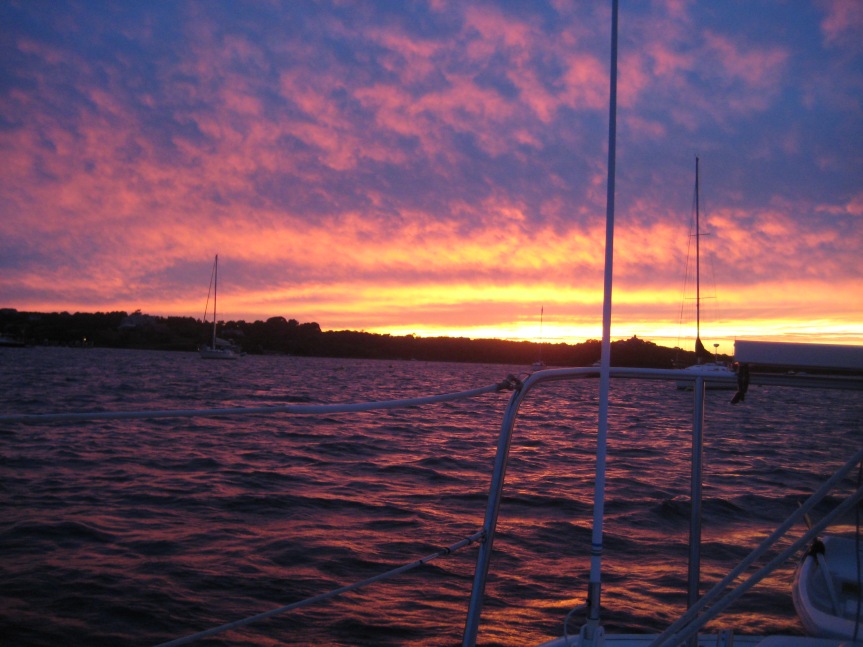 We had only planned to stay until Wednesday, but late Monday afternoon the winds started howling at a steady 16+ mph with gusts in the mid-20’s, night and day, and they weren’t forecast to stop until late Wednesday afternoon.  Heavy waves and a small craft warning were going to accompany the winds, so we decided to extend our visit until Thursday.  We had a lovely time relaxing, going to the Farmer’s Market, browsing in the shops, charging our electronics in the library, and watching plenty of boat t.v.. 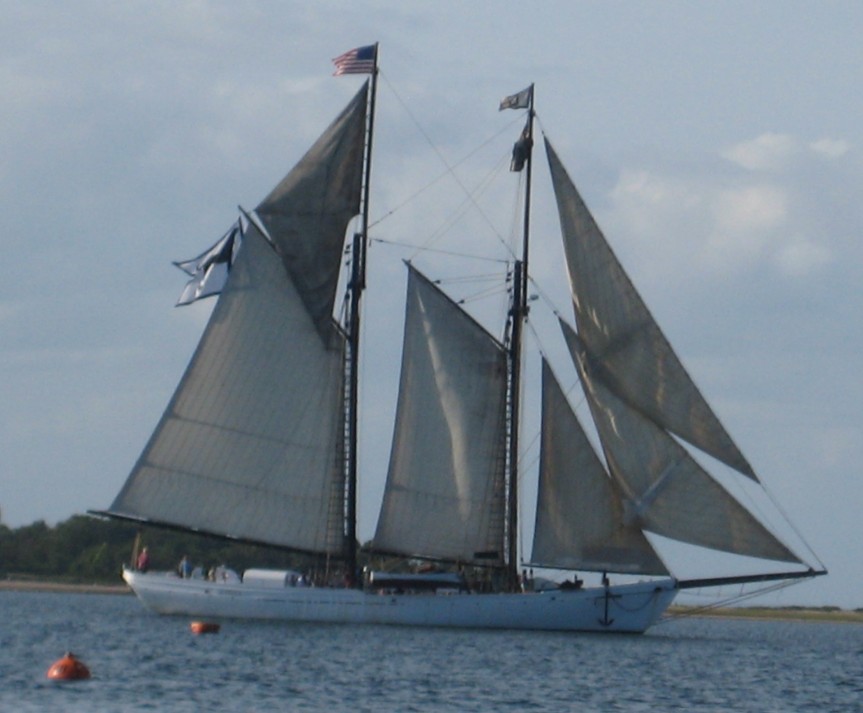 This boat was our favorite, however:

I have to admit that the howling wind started to get on my nerves by the second night.  Fortunately our sleeping position from the mega-bed kept the rocking feeling to a minimum, but the wind was just so darn loud.  It was the first time we’ve been on the boat overnight in those conditions (typically we would have just stayed home), but I reminded myself that if I want to live on a boat upon retiring then there will be plenty of nights like this, so I needed to get a bit more zen about it.  Mission accomplished.

As predicted, by late Wednesday afternoon the winds started to calm down.  Although they were going to pick up again Thursday afternoon, we had a small window of opportunity to head over to Narragansett Bay on Thursday morning so we decided to grab it.  We spent our last evening watching “High Noon” with Gary Cooper on our “media center” (iPad and Bose portable speaker), and went to sleep excited about continuing on our journey the next day.

Looking at the forecast, Sunday was going to be our best opportunity of the next several days to get to Block Island. It looked like it was going to be high seas and high winds beginning on Monday, so we took advantage of Sunday’s reprieve and headed out bright and early.

Leaving Stonington Harbor was much easier Sunday morning than entering it the previous day. When we came in on Saturday there was a group of eight people racing their sailing dinghies back and forth across the harbor. Since they were under sail and we were motoring they had the right of way, but as I said to Jeff later, it reminded me of the old arcade game “Frogger” with the dinghies representing the logs flowing across the water. But this time instead of landing on the logs, I had to miss the dinghies.

Anyway, the wind forecast for Sunday called for light and variable early, building to approx 10 knots for a few hours, and then dying off for the day. That’s exactly what we got. We motored for a bit over an hour until the wind built up enough to sail, and then we had a nice beam reach for a few hours before it died and we fired up the engine again.  With the exception of the short-lived winds, this trip was much nicer than last year’s inaugural trip to Block when we discovered what “building seas” meant and the wind was right on our stern. THAT was a white-knuckle, roly poly ride.

Now, about the title of the post. When you’re sailing to Block, from far away it looks like two separate islands. Last year we saw the “two” islands and spent some time debating what the second island could be. We decided that it must be Martha’s Vineyard, not realizing that Martha’s is a good 40+ miles away from Block. As we got closer we saw that the two islands were actually one, and when we subsequently looked at a chart we felt rather silly thinking that it could be Martha’s. So this trip, when we saw the “two” islands we had our inside joke – Look! It’s Martha’s Vineyard!

99% of the boats that go to Block end up in the Great Salt Pond which is jam packed in the summer. But after Labor Day there are plenty of moorings to choose from, so we had our pick after sweating it through the channel.  Supposedly the channel is 300 feet wide, but it feels much narrower to me, particularly when you’re a stone’s throw away from fishermen on land and another large motor boat is coming in the opposite direction. I had forgotten how narrow it felt last year. Probably a good thing.

At least we weren’t sharing the channel with this guy! 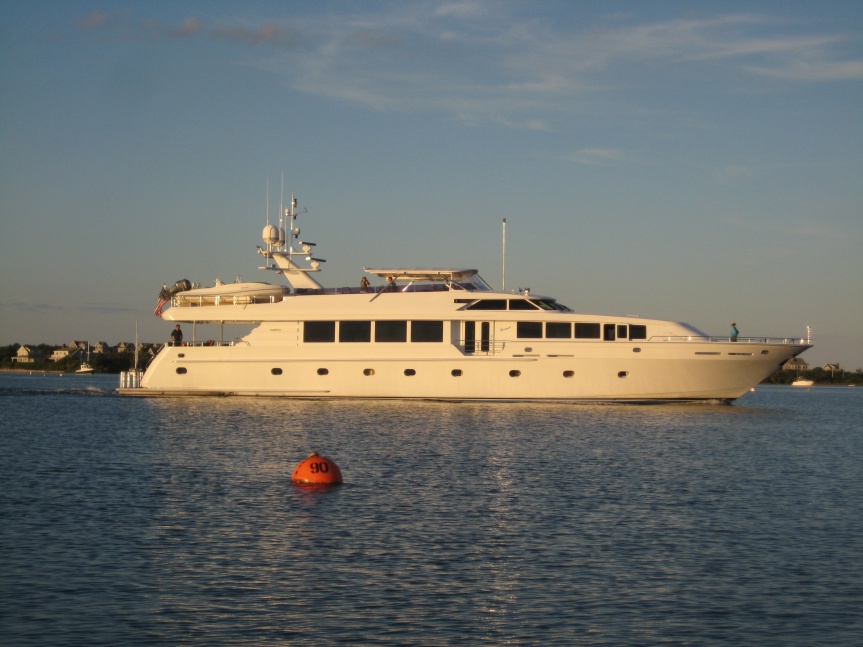 After we chose our mooring ball and tucked everything away, we made some cocktails, fired up the grill for some surf and turf (tri tip and Bomster scallops), and settled in to spend a few days on Block.