Little did we know that when we decided to go to Rock Sound instead of George Town it would turn out to be one of the smartest decisions we made this cruising season.  We knew that the anchorage in Rock Sound would be excellent if we ended up pinned down for several days due to high winds, and when we left Staniel Cay that was exactly what was in the forecast.  What no one could have foreseen at the time, though, was that those several days of winds would turn into almost two weeks with very little respite.

The trip to Rock Sound itself was uneventful once we made it through Conch Cut.  That part was “entertaining.”  When the wind blows strongly from the east, the cuts between the Exuma cays can develop what is called a “rage” when the wind is against the current.  While we had previously experienced sloppy departures, we hadn’t ever been in what we would consider a rage.  I think now we may know what people are talking about. END_OF_DOCUMENT_TOKEN_TO_BE_REPLACED

We spent almost a week and a half in Rock Sound before moving on to the Exumas.  We like Rock Sound quite a bit.  There are some things to see, it’s a very good place to stock up on groceries and supplies, and the anchorage is great – excellent holding, plenty of room regardless of the number of boats, and good all-around protection as long as you’re willing to move your boat depending on the wind direction.

It has been truly amazing at how few cruisers we’ve seen.  When we were in Rock Sound our first year there were probably 30 other boats.  This time we shared the anchorage with two others until a blow came in which raised the number of boats to a whopping six.

END_OF_DOCUMENT_TOKEN_TO_BE_REPLACED

Any place after Pipe Cay was going to pale in comparison, but we still enjoyed our stop in the Exumas Land and Sea Park. We spent a night anchored at Warderick Wells before moving on to Shroud Cay.  Everyone we spoke to who offered suggestions for Exumas stops said that we MUST see Shroud Cay, so how could we skip it?

We spent two nights in a very lovely anchorage where we were able to snorkle a few coral reefs (we saw lots of fish) and we also took our dinghy up the mangrove creek to the ocean side which was a lot of fun. 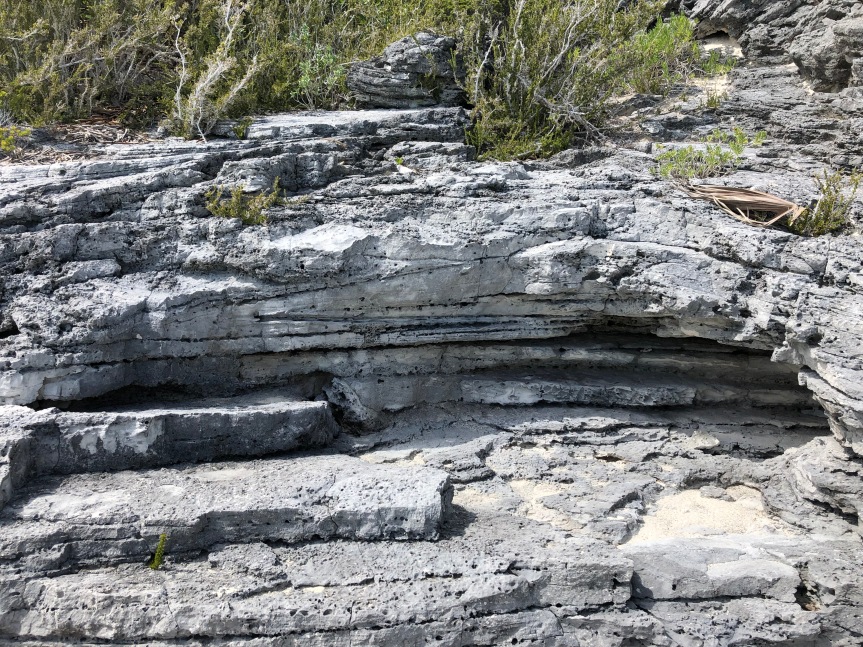 We didn’t have any fish-sighting success while snorkeling in the creek, but we did see a shark swimming in the shallows on the ocean side and a turtle in the creek as we slowly motored along. The Land and Sea Park has so many snorkeling spots that we didn’t get to see, but the pesky calendar won’t slow down.  We’ll definitely come back next season, but for now we needed to take advantage of good weather to cross back to Eleuthera and keep heading north. END_OF_DOCUMENT_TOKEN_TO_BE_REPLACED

When we decided once and for all to go to the Exumas, we determined that our strategy would be to get to Georgetown quickly and then explore as we slowly worked our way north.  We are thinking that for our return visit this fall we will start in the Exumas, so we wanted to see if Georgetown would be a viable base for us in the winter months.  But before we could get to Georgetown, we needed to wait out some weather in Rock Sound, Eleuthera.

Rock Sound proved to be a nice place to spend several days.  The harbor was large with great protection and holding, perfect for riding out several days of winds in the mid-20’s.  Our friends Jay and Tanya from S/V Minx were also in the anchorage so we were able to hang out several times with them (we had last seen them in Vero Beach) which was a lot of fun.  There is a blue hole in the middle of the settlement that we checked out (our first one), and we joined a group of cruisers for lunch at Sammy’s which had good food for a VERY reasonable price.

END_OF_DOCUMENT_TOKEN_TO_BE_REPLACED

I had hoped on this trip that we would get to see a lot of sea turtles.  We had seen a few so far, but not as many as I had expected.  What happened our first morning in the Royal Island anchorage more than made up for it.

Hearing a motorboat pass us rather closely, I popped my head out of the cabin to find a guy on the bow of the motorboat holding a net and another guy steering.  When they came by again I asked them what they were up to. “Catching turtles!” the net guy replied.  “TAGGING turtles” came the quick correction from the driver.  We laughed about that being an important distinction, and the driver said they would come by when they were finished.

After about twenty minutes they puttered up to Pegu Club and tied off on our rear cleat.  It turned out that the boat was affiliated with the Bahamas Sea Turtle Network and the University of Florida.  The guys had two turtles and we were welcomed onboard to watch the tagging process!