Any place after Pipe Cay was going to pale in comparison, but we still enjoyed our stop in the Exumas Land and Sea Park. We spent a night anchored at Warderick Wells before moving on to Shroud Cay.  Everyone we spoke to who offered suggestions for Exumas stops said that we MUST see Shroud Cay, so how could we skip it?

We spent two nights in a very lovely anchorage where we were able to snorkle a few coral reefs (we saw lots of fish) and we also took our dinghy up the mangrove creek to the ocean side which was a lot of fun.

We didn’t have any fish-sighting success while snorkeling in the creek, but we did see a shark swimming in the shallows on the ocean side and a turtle in the creek as we slowly motored along. The Land and Sea Park has so many snorkeling spots that we didn’t get to see, but the pesky calendar won’t slow down.  We’ll definitely come back next season, but for now we needed to take advantage of good weather to cross back to Eleuthera and keep heading north.

Our next destination was a return to Rock Sound so we could wait out a front. We took full advantage by hitting the grocery store so we could stock up on snacks. We also went to the laundromat for the first time since leaving Vero Beach at the end of January. Most laundromats in the Bahamas are incredibly expensive (at Staniel Cay they wanted $20 for a wash and dry) so we have been using a bucket and hanging our laundry on the lifelines to dry. Our friends on S/V Laura Jack had told us that the Rock Sound laundromat was only $3/load, so we were thrilled to give Showboat (the proprietor) some of our money!

As soon as the weather allowed we left Rock Sound and had a great downwind sail to Alabaster Bay where we joined our friends Tom and Anita on S/V Lone Star. This was a beautiful stop. The anchorage was gorgeous, the water was the warmest we had experienced, and we all enjoyed a hike over to the abandoned U.S. Naval Base and the pink sand beach on the ocean side. It definitely goes on the “must return” list. 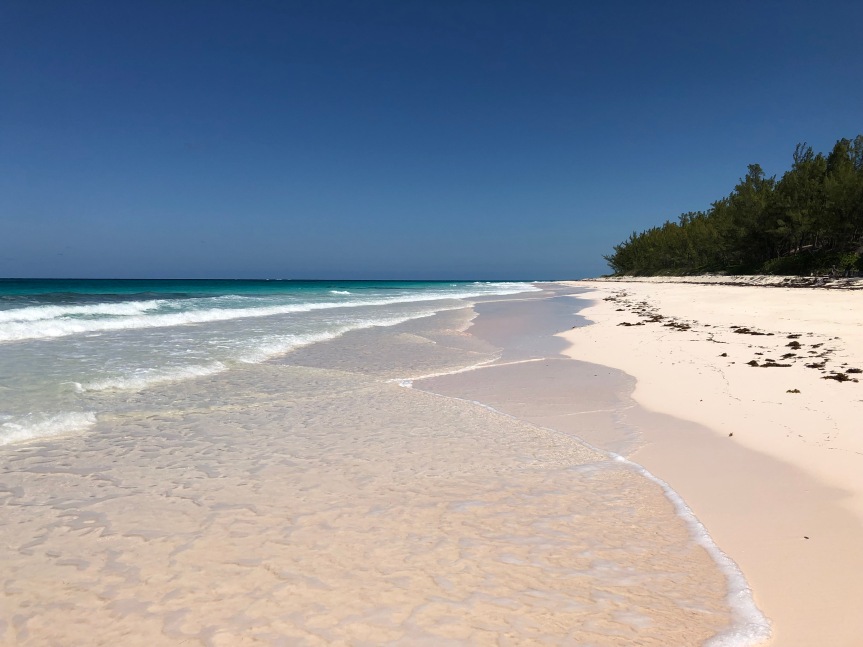 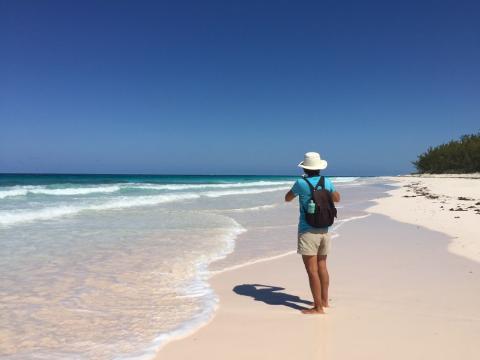 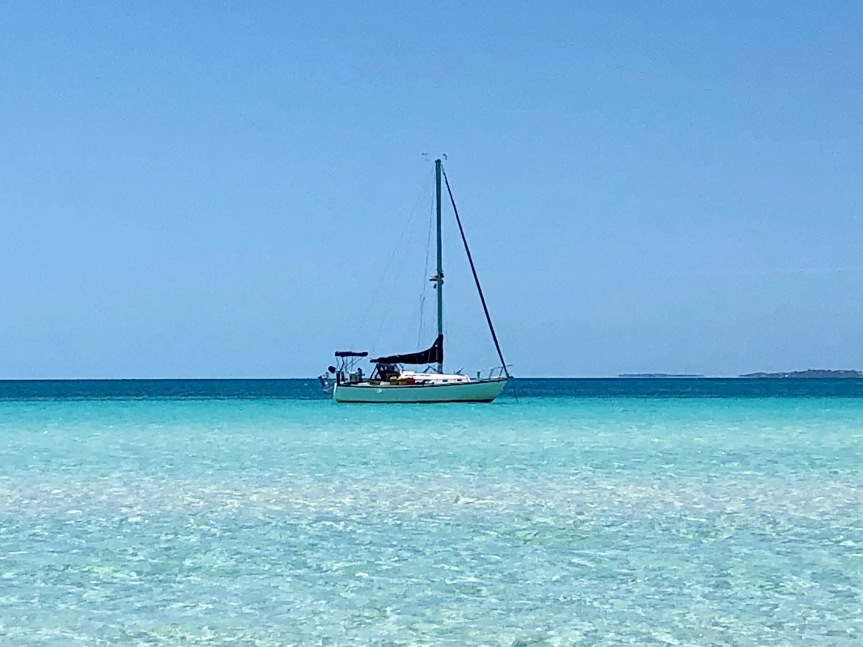 Two nights later Pegu Club and Lone Star sailed north to the anchorage at Royal Island where we planned to wait out a strong front. We enjoyed cards and movies together each night, and Jeff and I even took care of a few boat projects – our first ones in quite some time.

The starboard running light wasn’t working (again) and we needed to fix it before we cross back to the states. Jeff took it apart and saw that the wires were corroded (again), so he sandpapered it clean (again) and put some dialectic grease on the ends (that’s a new strategy!) to hopefully avoid a reoccurrence.  A test of the light showed that it was working again.  Yes!  We also finished wiring the other fan in the main cabin. It only took a year, but hey, it’s done! As the weather gets warmer, it’s nice to have an additional fan to keep us comfortable.

The forecasted front arrived as promised, but after 36 hours of 22-26 knot winds it finally passed so it was time to move on. North winds for a few days meant that we couldn’t yet head up to the Abacos unless we motored the whole way (and who wants to do that?), so we all decided to spend a few days in Spanish Wells while we waited for sailing weather to the Abacos.

Next up: Spanish Wells.