After enjoying several lovely days in Hope Town, we backtracked to Marsh Harbor for the Junkanoo event.  According to the Bahamian government website, a Junkanoo is a Bahamian national festival with roots that can be traced to West Africa.  Participating teams spend months working on a theme, developing costumes, musical compositions, and choreography.  Judges roam throughout the groups, scoring them on a page-long list of categories.  The Marsh Harbor Junkanoo is on a much smaller scale than the annual event held in Nassau on Boxing Day, but we still very much wanted to see it.

The posters in town said that the Juniors event would be held at 6:00 on Friday, with the Adults the following night at 7:00.  So being typical Americans from the northeast, we showed up slightly before 6:00 on Friday evening.  This being the islands, the fencing was just going up when we arrived.  Looks like we were a little early!

We passed the time walking around, talking to a nice woman who gave us the details on how the event would work, and checking out the various vendors and food stalls that were setting up.  We were eventually joined by our friends on S/V Laura Jack who we had last seen in Vero Beach, and we enjoyed catching up with them while we ate conch fritters and fried bananas.

Around 8:00, only two hours after the start time, the three junior groups started marching down the street.  The groups walk at about 1/2 mph so you have plenty of time to hear the music and take in the costumes and choregraphy. After a few hours the event was halfway over (the groups turn around and march back the other way), but by this time it was well past cruiser’s midnight and time to head back to the boat.

The next night was the Adult division.  Since it was supposed to start at 7:00, we took a lesson from the previous day and showed up at 7:30.  We knew we’d still be early, but we didn’t want to miss anything.  Once again we were obviously way too early, and we laughed about it with the same woman who had taken our admission fee the night before.  I asked her when the Junkanoo was really going to start.  She explained that last night was supposed to start at 6:30 (not 8:00), but apparently the minister who kicks off the event was late.  This time it should actually start at 8:00.  We figured that meant 8:30.

The time passed quickly as we chatted with some other cruisers hanging out by the food vendors.  S/V Laura Jack was much smarter than we were and they arrived around 8:30 p.m.  Finally, around 9:15 p.m. we could see the groups starting to begin their march down the street.

It was well worth the wait.  While the juniors the previous night were quite good, particularly given that they were elementary school students, the adults were amazing.  The groups were bigger, the costumes more elaborate, and the music was so much fun!

Now you have to understand, I actually am a big fan of electronic/house music.  Give me a steady 115-130 beats per minutes and I can bop along all night long.  Even though the groups weren’t playing house music, the idea was the same.  A steady, rhythmic beat with music over it that just went on and on.  It may not be everyone’s idea of a good time, but I was loving it.

According to The Abaconian, first place went to Spartans United with a theme of “Holiday Seasons.”  They won all of the categories except for Costume as a Group, winning Banner, Execution of Theme, Music, Group Performance, and Choreograph Dancers.  Frankly, I would have awarded them best Costume also, but alas, I wasn’t a judge. What do I know?  We did agree that they were the best of the three groups.

Second place was awarded to the Murphy Town Superstars with the theme “The Enchanted City of Agrabah.”  They were the highest earning group in the category of Costume as a Group. 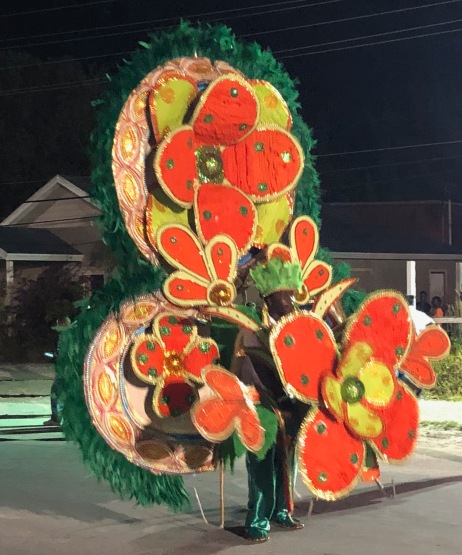 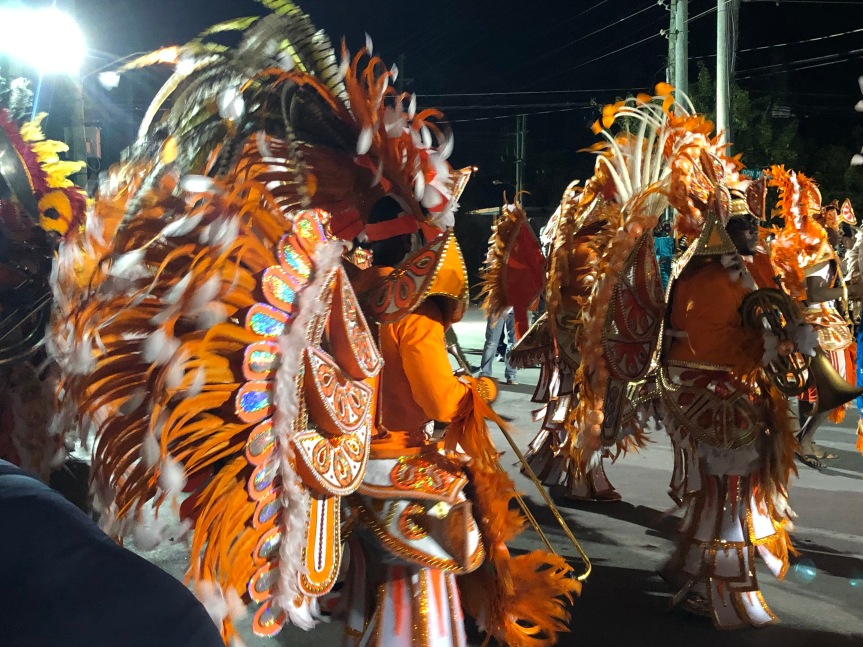 One of the things we love about traveling is getting off the beaten path and participating in local events.  The Junkanoo certainly qualified.  We had a fantastic time and were really glad we made a second visit to Marsh Harbor so that we could watch it.