We’ve discovered over the past two years that boat projects almost always have three characteristics: they take at least twice as long as expected, they cost more than anticipated, and they lead to the realization that another project must be added to the list.  Once in a blue moon, these three things don’t happen.  Well, there must have been an almost-blue moon last night because today we took care of a project that took much less time than we expected, and the cost was under 1/10 of a boat buck (less than ten dollars).  We did end up having to add another project to the list, but two out of three isn’t bad!

During last year’s offseason we replaced the mast light because the original one had lost it’s top before we bought the boat.  Of course a replacement piece wasn’t available, so we needed to buy an entire fixture.  We jury-rigged a fix for the first season but we weren’t comfortable with the possibility of water getting into an electrical item, so we installed a new one.  Being newbies we didn’t test the light before the mast was stepped, and of course once Pegu Club was splashed we realized that the light didn’t work.  It wasn’t a big deal because we weren’t planning on anchoring or sailing overnight last season, so we put it on the list for this winter.

Today saw temperatures in the low 50’s so we decided to take advantage and drove down to the boat to take care of the light.  Our theory was that the ends of the wires were corroded (last season we didn’t know about that possibility), so we brought brought some sandpaper to remove any corrosion.  We also brought electrical wire (yesterday’s trip to Home Depot) and alligator clips (today’s trip to Home Depot) so that we could use the battery from Jeff’s scooter to test our repair (apparently we can learn from our previous mistakes).  The boat battery is sitting in our basement getting a trickle charge, so it made more sense to bring the scooter battery since it’s probably forty pounds lighter.

Jeff got down to work with sanding the wire ends in the light fixture: 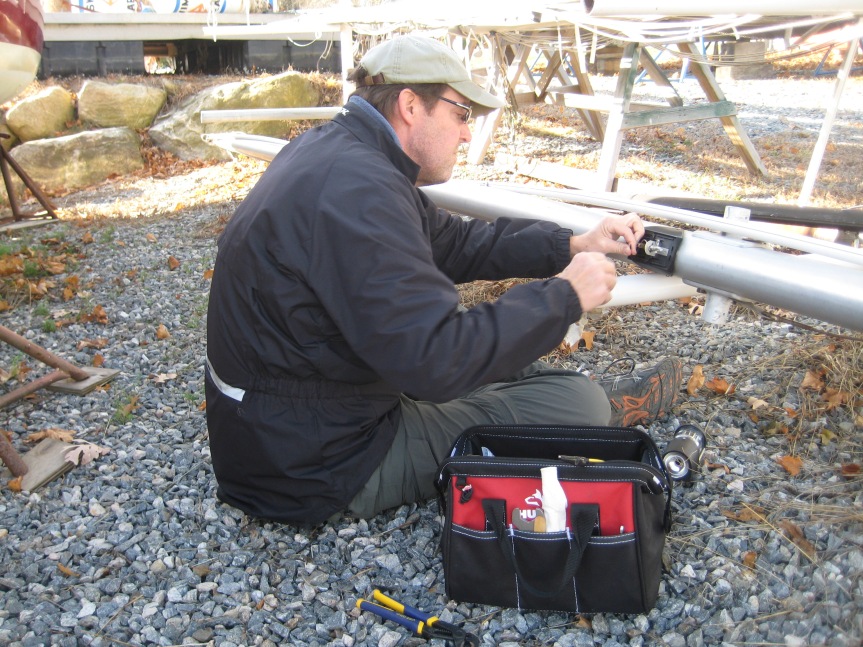 When he went down to the base of the mast to work on the other end of the wires, the problem was immediately apparent:

It appears that when the marina stepped the mast at the beginning of last season, one of the wires ended up getting pinched and almost cut straight through (as seen in the top wire).  Aha!  We’re not sure if it was simply caught underneath and the mast bounced as it was being stepped, or if the mast was actually sitting on the wire.  Either way, that’s why the light didn’t work.  Jeff cleaned the ends, spliced the wires together, and voila:

Both lights actually work, by the way.

The cover went back on and in less than 45 minutes after we had started, we were finished.  Amazing.  We high-fived each other, spent the rest of the beautiful afternoon at Mystic Seaport, and finished up with a stop in Stonington to pick up some Bomster scallops for a future Saturday night dinner.  Yum!

One project off of the list.  But what about the new project?  Before we left the house this morning we were researching LED bulbs.  We had intended to swap out the halogen bulb to reduce the electrical draw on this light, because we plan to do some overnight anchoring next season.  It was at that point that the lightbulb went on (ha!) and I realized/remembered that this isn’t an anchor light.  It’s a navigation light.  Anchor lights need to be 360 degrees, and this light obviously is not.  We don’t have an anchor light.  Doh!  So although we have fixed this light, an anchor light has gone onto the list.  Oh well.  Like I said, two out of three isn’t bad.

One thought on “There must have been an almost-blue moon last night.”