With school out for the summer Jeff has a new early-morning schedule.  So on Friday, June 19th, we were able to head down to the boat after work for a true full weekend on the boat.

We were able to start the weekend by attending our first Friday Night event at Shenny.  Every Friday evening during the summer the club holds “Friday Night.”  People bring three dollars, a dish to share, and their own drinks.  The club provides hotdogs, hamburgers, and all of the fixings.  Typically more than 75 people show up each Friday, so we thought it would be a good opportunity to meet some more people.  We arrived a bit later than we intended because Alex from our old marina dinghied over to chat for a while, but we still had a good time and met a few people, including a couple that had spent a year cruising in the Bahamas.  Very cool.

Saturday was cloudy with temps in the upper 60’s, and after lounging around the boat for the morning we headed out for a sail.  Winds were in the low teens and we didn’t have any real destination in mind.  We were simply going to sail.  We practiced tacking quite a bit, trying to see just how close to the wind Pegu Club could get (answer: not very), and just generally enjoyed being out for a few hours and 10 nm.

When we had left for the marina on Friday we weren’t certain if we were going to stay for the whole weekend.  The remnants of Tropical Storm Bill were forecast to come through on Saturday night, and most of Sunday was supposed to be a washout.  After we came back from our sail though, we checked the forecast and saw that Sunday might be salvaged after all.  It was going to rain hard starting late Saturday afternoon and all night, but the skies were supposed to clear by Sunday at noon.  Reasoning that it would be good practice for our future cruising life (which, after all, won’t be sunny blue skies every day), we decided to stay.  Yay!

We hadn’t brought enough food for the weekend since we had originally thought we would be going home on Saturday afternoon, so we made a quick run to Paul’s Pasta and Big Y, and then settled in for the rainy evening.  We watched Rango in our “media room”, which consists of setting up the iPad and the Bose on the steps that lead into the cabin, and then it was time to put the mega bed together and get some sleep.

As forecast, Sunday morning was pouring rain but it pushed through by noon.  This was a welcome development because Jeff’s friend Jeff O. was going to be sailing with us that day.  Jeff O. grew up sailing on his parents’ boats and he had been sailing with us when we were using our practice time in Narragansett back in 2012, but he had since moved to Florida and had not yet seen Pegu Club.  He’s back in Connecticut for the summer, and we were psyched to host Pegu Club’s first visitor of the season.

Jeff O. brought the good weather.  After he arrived the clouds cleared out, the winds picked up, and we were off for 11 nm.  We started out by sailing around North Dumpling, and then headed down Fishers Island for a little while before starting to make our way back.  It grew steadily warmer as we sailed, ultimately getting into the upper 70’s/low 80’s, and it was lovely.

Unfortunately the pictures were kept to a minimum because I had to use the iPad.  Our camera was a victim of T.S. Bill when I accidentally left it in the cubby outside overnight where it was thoroughly drenched.  Given that it was 8 years old, however, it’s likely time for a new one so it was no great loss. 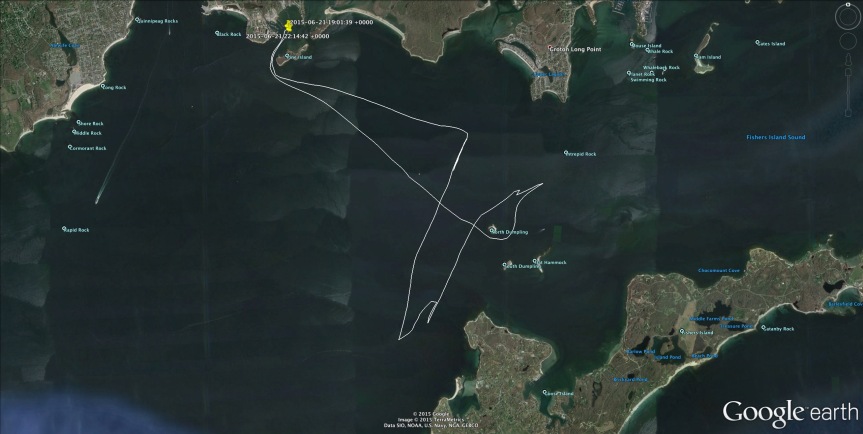 After arriving back at the marina (which involved a bit of stress on my end since we were running low on gas – oh how I hate motoring!) we all enjoyed snacks and drinks in the cockpit, hanging out, catching up, and soaking in the sun.  Driving home that night we once again agreed that having weekends off together is awesome – especially when you can get two sails in.