Once we had agreed on a purchase price, we needed to get a survey on Big Pegu.  If it didn’t turn up anything that was a deal breaker, then we would finalize the deal and bring her home.  We searched through the two sailing forums that we frequented, found a surveyor who came recommended, and scheduled the survey for Thursday, July 30th.

The 30th dawned bright and sunny as we found ourselves heading to Orient Point on the 6:45 a.m. ferry out of New London.  In order to get to Orient Point the Cross-Sound Ferry goes through Plum Gut – a complete non-event for the ferry, but something that sailboats want to time appropriately.  Coastal Boating ranks Plum Gut as the 5th most challenging coastal water in the northeast.  During the tide change, millions of gallons of water squeeze through the narrow passage between Long Island Sound and the Atlantic, with the depths dropping from 323 feet to 67 feet in less than half a mile.  All of this creates strong currents, and a strong wind against the current can cause standing waves of 6-8 feet.

When we went on the ferry to see Big Pegu for the first time, it was foggy and the water was like glass.  We approached Plum Gut during the max flood, and oh how I wish I had my GoPro out at the time.  The contrast between the water in the area before Plum Gut and the water actually in Plum Gut was something we’ll never forget. For this trip we weren’t going to be hitting the Gut until 30 minutes past max flood and the current that morning wasn’t particularly strong, but I took a video anyway which gives a taste of the difference in the water.  The perspective from high up in the ferry is very different than from a small sailboat.

After arriving at the marina in Greenport, Big Pegu was hauled out of the water and it was time for the survey to begin.

We own a copy of “Inspecting the Aging Sailboat” by Don Casey and we had gone over her pretty thoroughly before deciding to make an offer on her, so we had a pretty good idea of what to expect.  The only area we had no clue about was the engine.

Big Pegu has an original, one-cylinder 12hp Yanmar diesel, and we know absolutely nothing about diesel engines.  The sum total of my knowledge is from my stepdad’s old Mercedes that he had when I was growing up (“Granny” was her name), and I remember we had to push a plug in for several seconds before starting her.  Big Pegu doesn’t have a glow plug, so I didn’t even have that going for me.

The survey included a sea trial where we took her out for a while, putting the engine though it’s paces while the surveyor did surveyor-type things with the engine.  Fortunately, we came back with a thumbs-up for the engine.  We fully intend to put in a new engine before we head out for good, but given the cost we’re hoping to be able to do it on our schedule rather than having our hands forced.

Overall the surveyor didn’t find anything we didn’t expect (and a few days later his report ultimately valued her as-is at $1,500 – $3,500 more than we paid for her – yay!) so back at home that evening we called the owner and finalized the deal.

That night I was lying in bed awake from 1:30 a.m. – 4:00 a.m. having my typical second-thoughts.  What if we’re making a mistake; What if she turns into a money pit (duh, she’s a boat!); We’ve sold a perfectly good boat that we know so well for an unknown; etc.  I woke up Jeff at 4:00, explaining my concerns.  He was half-asleep and said, “Don’t worry.  By the third boat we’ll be old pros.”  Third boat??!!  I burst out laughing and then promptly fell asleep.  Turns out in talking to him the next morning what he meant was “By the third stanchion we’ll be old pros” (meaning rebedding the stanchions).  Freudian slip anyone?

Two days later we found ourselves back on the Cross-Sound Ferry for the last time, heading to Big Pegu to finalize the transaction.  We paid the owner, he gave us a bill of sale, and we officially owned our second boat!

Based on the timing we knew we would miss slack at Plum Gut and have a foul current, so we spent the night on the boat and brought her back to Groton on Sunday.

Unfortunately there wasn’t any wind on Sunday so we had to motor all of the way back, but Thumper (the name Jeff has given our diesel) didn’t skip a beat.  It took my brain about 20 minutes to get used to a wheel vs. a tiller.  A typical conversation with myself in my head went like this:  “Wait!  I want to go left!  Why am I turning right?  Oh that’s right, it’s a wheel, not a tiller.  Turn the wheel to the left, just like a car.”

Five hours and 21 nm later we picked up our mooring like we had done it a thousand times on the boat, and Pegu Club was officially home. 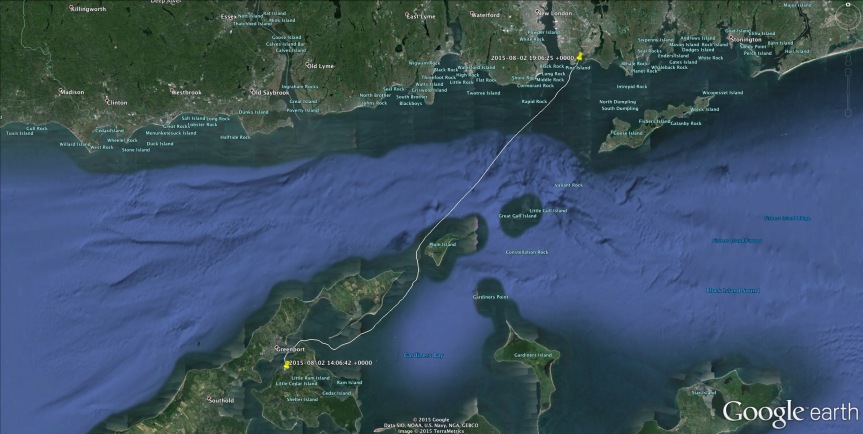 Our next order of business is to have her hauled for the season so we can give her some lovin’.  We’d love to start sailing her all over, but she needs a bit of TLC and if we wait until our typical late-October haulout we’ll be rushed by the impending cold weather.  This way we can take our time and get to know her.  By the time she splashes in late April we (Pegu Club, Jeff, and I) will be raring to go and start some new sailing adventures!