When I last left off, it was Sunday night and we had just finished applying the first two coats of Interprotect.  That evening I voiced a thought that had been rattling around in my head for the past few days.  “Jeff?  What do you think about putting the launch date off for a few days?”  “I’ve been wanting to do that for the last month, but I knew if I suggested it you would say no.”  He knows me so well.

Although I really didn’t want to push back Pegu Club’s splash, I couldn’t avoid the fact that we had only one weekend left and a ton of work left.  It wasn’t that I thought we could get it all done.  After all, the boat to-do list is never finished.  It’s just that it was going to be very difficult to complete the things that we either had to or really wanted to do: painting, cleaning the water tanks, washing the boat, etc.  So we decided to delay until May 6th.  It would give us one extra weekend plus several possible days for painting.

As for painting, as soon as we arrived at home that night I had looked at the forecast.  What had been predicted to be 42 overnight was now a frost advisory with a projected low of 35!  Ack!

I was ripped.  Here we had been so diligent in waiting for a weather window knowing that the hull needed to be at least 41 degrees for 24 hours, checking multiple times that very day, and now it was dropping well below that!  I complained to Jeff that there is absolutely no accountability for weather forecasters, and he noted that they didn’t have any control over Mother Nature.  That wasn’t the point, however.

When we went to bed that evening it was around 48 degrees.  When I woke up at 1:30 a.m. it was down to 39 degrees, so even though there was absolutely nothing I could do about it I proceeded to stay awake fretting for the next three hours.  When I finally fell asleep at 4:30 it had dropped down to 35 degrees.  Sigh.

I called Interlux first thing in the morning and received a return phone call from Dale, who I had spoken to on two previous occasions during the winter.  I think he remembered me.  I explained the whole situation to him and asked if I should just throw myself off of a bridge now or later.  He laughed and said that based on what I was telling him – how quickly it had dried the day before, how low the humidity level was, how sunny it had been – he was sure we would be o.k.  He explained that they had to set a cut off somewhere, and maybe if it had been in the 30’s for 8-10 hours it would be different, but we’d be fine.  Monday night I slept like a rock.

On Thursday we had a good forecast so I took the morning off from work so we could drive down to Shenny and put a third coat of Interprotect on the boat.  Three down, three coats of paint to go.

As the weekend approached it looked like we wouldn’t be able to paint on Saturday – it was going to be too cold that night and we weren’t taking any chances, but Sunday was promising so we drove down Saturday morning armed with our lengthy to-do list.

First up was to clean the water tanks.  Pegu Club has a 38 gallon water tank in the v-berth and a 25 gallon tank in the keel.  With Little Bristol we had brought gallon jugs of water each weekend for drinking, but we knew that wasn’t a sustainable plan for when we go cruising.  We need to be able to drink the water out of the tanks, so although they weren’t too gross we still wanted to give them a good cleaning so we could start getting used to the concept.

We consulted our trusty Don Casey book ,”This Old Boat.”  He recommended cleaning tanks with water and a generous splash of dishwashing detergent, scrubbing wherever you could reach, rinsing, and then filling the tanks with water combined with more dishwashing detergent and bleach and letting it sit overnight.  To empty the tanks he recommended siphoning them with a garden hose.  Everything went according to plan, so once they were filled with soaking water it was time to start the engine for the first time since we had winterized it.

John the diesel guy had recommended letting the engine run for ten minutes, so Jeff put the raw water intake hose in a bucket of water and had the garden hose at the ready to refill the bucket as necessary.  I crossed my fingers, turned the key, and Thumper roared to life as if she had just been started the day before.  Hooray!  Another item checked off.

Next we wanted to finish the mushroom vent for the Nature’s Head.  The G10 that we had epoxied into the deck hole the weekend before had throughly cured, so we drilled a new hole, installed the new deck fill, and then installed the Vetus mushroom vent over it.  The vent cleared the toe rail with almost no room to spare.  This is actually ideal in that it minimizes the amount of deck space it takes up and will be much less likely to get in our way as we walk by. 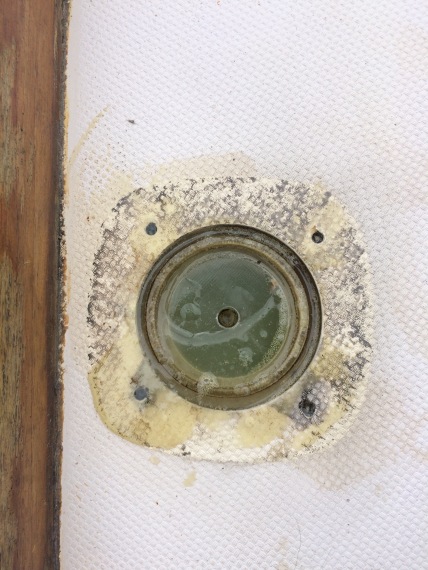 After that was finished we took the small battery that we had purchased in the fall and tested out the LED lights that we had installed in the mast a few weeks previously.  It’s a good thing we did because the connecting piece needed to be tightened for the deck light – a much easier task on the ground vs. in a Bosun’s chair halfway up the mast.

The last task for the day was to install the bathroom sink and drain hose.  Jeff had bought some adhesive caulk for the sink, but when we installed the drain hose it was a bit too long so the pressure was causing the sink to pop out.  Rather than cut the hose again, we put an assortment of weights in the sink including chains, a vise, and a large chunk of granite. The hope was that the weight would keep the sink in place until the caulk could set up.  With that, we called it a day.

Sunday started with painting.  Pegu Club rests on poppets, and the area under them can’t be painted until they are moved.  We had debated whether to paint all of the coats and then deal with the area under the poppets, but ultimately decided to move the poppets and paint four coats of Interprotect that day on the unpainted squares.  A warmish, dry day made quick work of that task.

Jeff is ready to paint those squares! 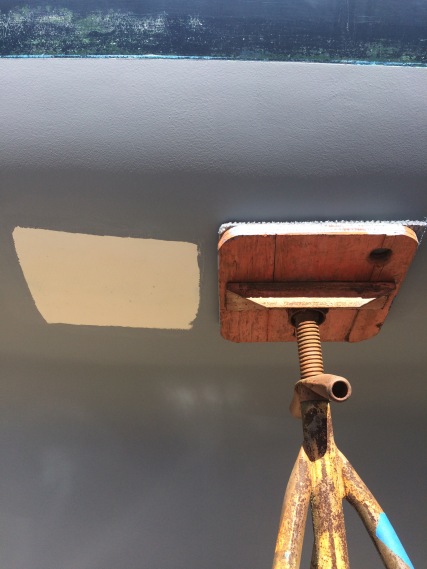 After we were finished we siphoned the water tanks, rinsed them thoroughly, and filled the tanks with water and a tiny bit of bleach.  63 gallons of water, ready for drinking and washing dishes.

Turning to a bit of electrical work, we installed the two bulkhead LED lights that we had ordered from MarineBeam, and Jeff put in a new terminal strip that connects our wind instrument.  The old one was quite corroded and the wires in some cases were barely hanging on.  After some stripping, crimping, and heat shrinking, we had a much better setup.

Next we did some drilling and tapping for our lazy jack system.  The lazy jacks on the boom were attached with bolts.  When we were taking the rigging down way back in August, we couldn’t for the life of us figure out how to remove the lazy jacks.  Our mooring neighbor, Vincent, had suggested that we drill out the bolts and then use a tap set to create threads so we could use screws in the future.  I didn’t even know there was such a thing!  Jeff introduced me to that very cool invention on Sunday, and I have to say I was quite impressed.  Another task complete.

Whew!  We had accomplished a lot that weekend.  But we weren’t finished yet!  We figured out how to run the wiring for our Nature’s Head fan to the battery without having to drill a bunch of new holes.  It looks like we’ll even have enough electrical wire from our set up in Little Bristol.  Excellent – one less thing to buy.

We were feeling darn good.  Everything had gone smoothly that weekend, and we were crossing items off of our list left and right.  It was getting towards the end of a long weekend, but we decided to do one more thing.  You know how when skiers decide to take one last run after a long day, that’s when they break their leg?  Well, we took one last run.  We removed the chain, vise, and granite from the sink.  Boing!  It popped right back up again.  Doh!  We should have quit while we were ahead.

Poor Jeff spent the next hour lying on the floor, trying his hardest to get the clamps on the bottom of the sink to attach into the countertop.  The original screws were too long, so he added washers and it still didn’t work.  Finally he decided to call it quits.  He proposed drilling screws directly into the rim from above, and while I said that was fine if he really wanted to, he needed to keep in mind that this boat is going to be our future home.  If he didn’t think it would bother him then it wasn’t going to be bother me, but I knew that eventually it would drive him nuts.

On the drive home that night my MacGyver started kicking around ideas to make it work.  I knew he would come up with something.  Looks like it will be task number one (after painting) next weekend.

2 thoughts on “Wow! That was a productive weekend!”