August brings warm temperatures and generally mild winds.  We were lucky the weekend of the 19th though, because the forecast was for two days of winds at about 10-15 knots and warm temperatures.  We were particularly pleased about Sunday’s forecast, because our friends Deb and Wendy were coming that day for their maiden voyage on Pegu Club.

Jeff and I enjoyed a very nice sail on Saturday.  With winds from the south we decided to head into Long Island Sound with no particular destination in mind.  We simply sailed.  On the way back we had some great boat t.v. with a race just off of Fishers Island.  Everyone was enjoying this rare treat in August.

Sunday was supposed to start off sunny with clouds moving in and rain in the early evening.  We were keeping our fingers crossed for Deb and Wendy’s sail, and happily the weatherman didn’t let us down.

Deb and Wendy called us from the parking lot when they arrived, so we told them to walk down to the end of “D” dock (which is where the launch is kept) so Charlie could bring them out to Pegu Club.  Well, the end of “D” dock is also where boats can get fuel, ice, and water, and there were several boats there when Deb and Wendy arrived.  Charlie told them to hop on and he’d be right with them.  What Charlie didn’t do was point out which boat was the launch, so Deb and Wendy proceeded to start climbing onto the nearest boat, whose owners looked at them with puzzlement until Charlie saw what was happening.  Hey, how are you supposed to know if you’ve never seen the launch before, right?  The peals of laughter ringing across the mooring field alerted us to the fact that they had made it to the end of “D” dock.

The laughter and enthusiasm continued for the rest of the day – everything from cheering when the jib was rolled out, to sighs of relief when Thumper was finally turned off.  Their reactions made me appreciate the little things that we sometimes take for granted now that we’re almost 2/3 of the way through the season.

We were hoping to take them around North Dumpling which is usually a nice beam reach with the prevailing southwest winds.  The sail has become our standard route for first-time guests, but this time the winds were from the southeast – right where we wanted to go.  No problem though.  We tack, tack, tacked while we all enjoyed each other’s company (and snacks, courtesy of Deb and Wendy!)

After it was clear that Pegu Club and her passengers were in a groove, we asked Deb and Wendy if they wanted to steer.  With zero hesitation, there was definitely no need to ask twice.  Quickly getting the hang of how Pegu Club responds to the wheel, they both looked right at home while Jeff and I chilled in the cockpit.  They can crew for us whenever they’d like. 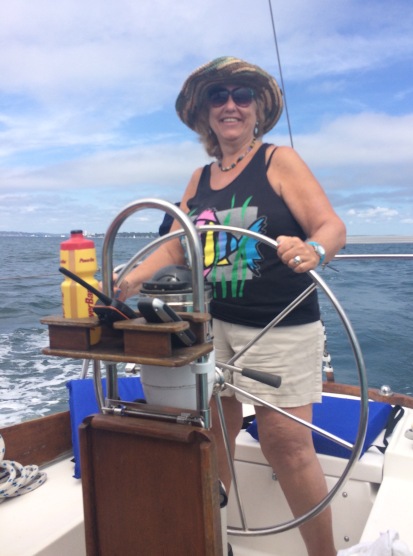 Deb and Wendy – masters at the helm.

The clouds started thickening (you can see it in Deb’s picture above) and for awhile I wasn’t sure if we were going to be able to get close to North Dumpling before showers would chase us away.  Fortunately along with the clouds came a change in the wind direction,  leaving us in a great position to slide right on by, enjoying the view.

After passing North Dumpling we started to feel intermittent raindrops, our signal that it was time to return to Shenny.  More cheers followed when Jeff caught the mooring ball on the first try, and the rain held off while we all had a few more cockpit snacks.  All too soon it was time to wrap up what had been a splendid day.  We had such a wonderful time with Deb and Wendy.  They definitely have a standing invitation to come down whenever they’d like.

2 thoughts on “Two consecutive days with nice winds in August? Hey, it can happen!”