One of the items we’ve wanted to purchase for Pegu Club is a whisker pole.  Sailing down wind the jib tends to collapse on itself when it’s caught in the main sail’s shadow, so a whisker pole is used to keep the headsail out to weather which improves speed and efficiency.  With the prevailing winds around here we don’t tend to do a lot of downwind sailing, but we know that will change when we head out permanently.  In the meantime, it will be nice to have for those occasions that call for it.

Our initial plan was to buy one at the Defender Warehouse sale, but they run around $850 on sale and with all of the money we had spent getting the house ready we decided to wait a bit.  Defender has categories of items that go on sale throughout the season with prices as good as the Warehouse sale, so we knew with a little patience we’d get one before the summer was out.

Looking at their website last week, I saw that they were having their Sail on Sale sale so it was time to pull the trigger.  After a lot of research to make sure we were buying the right one, along with the proper mounting accessories. the plan was to pick it up on Saturday morning.  We were talking about it on Friday after work as we packed our things to drive down to Shenny, when suddenly I thought of the consignment shop in Newport that we had been to a few weeks ago.  Maybe they would have one?  Jeff didn’t think so – he had only seen larger poles while we were there – but I thought it wouldn’t hurt to call them.

Saturday morning we were up bright and early to drive down to Branford to meet Sam, the guy who runs Dutch Wharf Marina where we’ll be hauling Pegu Club this offseason for her new engine.  Then we headed in the opposite direction to Newport to check out the whisker pole.  Driving down I-95, we were close to Groton when I suddenly felt  a strange vibration in the car.  Then it sounded weird.  Uh-oh.  This was highly unusual.  Our 2004 Scion XB has required nothing but routine maintenance since we bought it, but it looked like that was about to change.

We’ve actually talked through this scenario before – What do we do if we’re down in Groton and the car breaks down? – so we took the next exit and pulled over.  My faith in humanity was restored as no fewer than four people stopped to see if we needed help, and one guy gave Jeff a ride to the hardware store to buy some oil (although I’ll admit to thinking “Bye, Jeff” as he drove away with a complete stranger).  In the meantime I used Yelp to find the nearest open auto repair shop with decent reviews.

Broadway Auto in Mystic was the most likely candidate.  It was close and there was an Enterprise car rental facility nearby if necessary.  After Jeff returned we put-putted a few miles down the road and pulled into the station.  It felt like a throwback to what the 1950’s must have been like.  The kid who was working there immediately came over and as we explained the symptoms he said that it sounded like it was misfiring.  He pulled out the diagnostics equipment (o.k., so not exactly 1950’s there) while the owner came over, and within a few minutes it was clear that the issue was with cylinder #2.  Tentative diagnosis was that it was the spark plug, maybe the coil.  Otherwise it would be worse.

The owner pulled out his wrench, unscrewed some stuff, and pulled out a virtually non-existent spark plug.  It actually looked original.  Guess we had our answer.  The owner called up Napa in Westerly, RI and since it was going to take 30 minutes for them to arrive he suggested that we go next door for some coffee and a snack while we waited.  After a very pleasant breakfast at M/Bar, a new cafe/restaurant in Mystic in a restored Mobil gas station, we returned to find the car running as good as new.  Less than two hours after we had pulled over, we were back on our way to Newport.  Talk about luck!

Our luck continued because when we arrived at Newport Nautical Supply the whisker pole turned out to be perfect.  It just needed a bit of cleaning and lubricant.  We also picked up a smaller wheel for $75 (Pegu Club came with a massively oversized wheel that takes up way too much room in the cockpit), along with a few books for $5 each – including a Pardey book that I had been eyeing just the day before on Amazon.

Back at Shenny we cleaned up the whisker pole, sprayed some McLube in the ends, and it worked as well as new!  For now it’s mounted on our stanchions although we may switch to mounting it on the cabin top.  Either way, Pegu Club is looking quite salty with her new accessory! 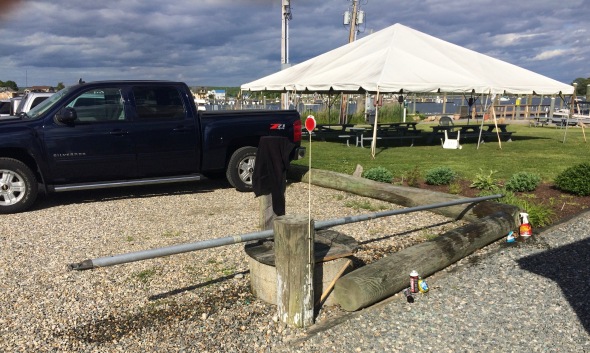 Our new whisker pole fully extended (left), and in its new spot on Pegu Club (right).

Unfortunately by the time we came back and cleaned up the whisker pole the day was over.  Sunday morning started out sunny with a bit of wind, but we had already committed to volunteering for the Sunday Sailing School breakfast.  By the time we were finished the clouds were moving in and the winds were gone.  No sailing again.  Gah!  Oh well.  We saved a fortune on the whisker pole so the sacrifice was definitely worth it.  But next weekend we absolutely have to go out for a sail and an overnight away from the dock – weather permitting of course.  Jeff and I are both really itching for a good sail and a change of scenery!