One of the many things that I find appealing about cutting the dock lines is the challenge of living off the grid.  Pegu Club will be our full-time floating home, and since we’re planning on being at anchor 99% of the time we needed to figure out what to do about electricity.

While the simplicity of not having any electrics on the boat is appealing, even I can’t go that far.  We’ll want to recharge the iPad and the music player.  We prefer a chartplotter with paper charts as a backup vs. paper charts and a sextant.  The Nature’s Head works best with a small computer fan for venting.  Clearly, we need and want electricity, but how much is enough and how should we get it?

For some people the answer is, “You can’t have too much, so you should shove as many batteries and solar panels as you can fit on your boat.”  Unfortunately we don’t have a limitless refit budget, and since Pegu Club is a smaller boat we’re sensitive to loading her down with unnecessary weight.  As a result, that answer didn’t work for us so we needed to be thoughtful as to how much capacity we really needed.

The first thing we needed to do was estimate how many amps we would use in a 24 hour period, both at anchor and while on a passage.  With the help of our trusty Don Casey book, “This Old Boat”, we started writing down every possible item that used electricity and how many amps each item would need: fans, lights, instruments, VHF, charging electronics – everything.

After we thought we had a comprehensive list we posted it on Cruisers Forum to double-check our assumptions (and our math) by getting feedback from people who were already cruising.  It was hands-down the most useful experience I’ve ever had on that forum.  By the time the thread had run its course we had fixed a few math errors and were able to greatly reduce our passage projections, estimating 98 amps in 24 hours on passage (a number that is still likely too high), and 35 amps for 24 hours at anchor.  Keep in mind that our numbers would be quite a bit higher if we had a refrigerator or freezer.

Trying to hone in on these numbers was particularly important because of our choice of solar panels:  Solbians.  Solbians are extremely light, flexible solar panels.  They are also quite expensive – even with the 30% federal tax credit – so we definitely didn’t want to buy more than we needed.

Whether to buy cheap rigid panels or Solbians is something we have been kicking around for several months, changing our minds repeatedly.  Rigid panels are cheap, but heavy.  We would either need to mount them on a frame on the bimini or replace our lifelines on either side of the cockpit with welded-on stainless steel tubes so we could pivot the panels out.  I think frames on the bimini are unattractive, and the welding solution wouldn’t be ideal or inexpensive.  Solbians, on the other hands, are light enough that they can be mounted directly on the bimini which looks better (in my opinion), and you don’t need to spend money on a frame.

Once we knew what our energy needs were, we looked at the cost and weight of rigid panels vs. the equivalent output Solbians.  For us it was a no-brainer.  We would need three rigid panels to have the same output as two Solbians, which meant we would need three controllers vs. two.  Add the cost of the mounting frame and the difference between the two options was well under $500, with the Solbians weighing 60 pounds less.  Now that we were able to actually crunch some real life numbers vs. just hypothetically kicking it around, we were finally comfortable with our decision to go with the Solbians.

The plan is to buy two Solbian SXp138 panels this spring which will give us 64-84 amp hours each sunny day.  With an estimated power usage of 35 amp hours a day at anchor, that’s more than enough to keep our batteries topped off.  The panels will also likely be sufficient when we’re on passage, but we can supplement with the engine as needed.

Compared to the solar panel decision, choosing a battery was easy.  Currently we have two 85 amp hour AGMs on Pegu Club.  While it’s much more than we need for our current usage, it will be insufficient when we are out full time.  The standard advice to maximize battery life is to only use 30% of the bank’s capacity.  That means our 170 amp hours was really only giving us 51 amps.  Enter the Firefly battery. 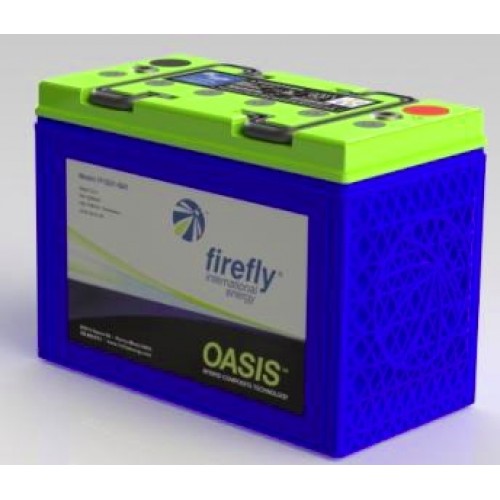 Firefly is a carbon fiber AGM battery that we’ve been keeping our eye on for a few years now.  It looks like a game changer.  Fireflys can be discharged 80-100% without any loss of performance, and they have no problem handling a partial state of charge.  We’ve read excellent reviews from people whose opinions we truly respect, and we knew that’s what we were going to buy.  Because they can be deeply discharged, we could buy two Fireflys at 110 amp hours each for a total of 220 amp hours. Because they can easily handle a 50% discharge, two would give us a useable capacity of 110 amp hours which will easily take us through several cloudy days at anchor without needing to run the engine.

Firefly’s aren’t cheap at first glance, but compared to buying three standard AGM batteries to get the equivalent output, the cost difference is minimal.  Plus, there will be 100 fewer pounds of weight on Pegu Club since we won’t need a third battery.

Currently there is a bit of a wait for Fireflys so we ordered two from Cay Electronics in Rhode Island a few months ago.  We received an e-mail last week letting us know that a shipment would be coming in soon so we’ll drive up to Portsmouth to pick them up vs. paying for shipping.  At 75 pounds each, we figured shipping wouldn’t be cheap.  Plus, it will be a good excuse to go to Newport for the afternoon.

Getting 150 pounds of batteries into the boat?  That should be entertaining.  I think we’ll wait until Pegu Club is back in the water so we (meaning Jeff) don’t need to haul them up the ladder!

2 thoughts on “Calculating our power needs.”