As we head north we are trying to sail on the shallower Exuma Banks side as much as we can so we can enjoy the beautiful colors of the water.  To get from Leaf Cay to Rudder Cut Cay we were going to need to go around the Pimlico Cays which have low water depths of under 4′ (which is less than our draft).  Additionally, the chart indicated that the sand shifted so it was possible it could be shallower.

After asking about it on a Facebook group we belong to, we were encouraged by our friends on S/V Duchess who had been through the area a few weeks earlier with a draft 2″ deeper than ours.  High tide was in our favor so we decided to go for it, and we were glad we did.  It was a nice route, and once again it boosted our confidence a bit.

Dropping the anchor at Rudder Cut Cay, we found to our delight that we had it all to ourselves.  That hasn’t happened since we left the Abacos.  We were a bit surprised because Rudder Cut Cay offered good protection from a strong front that was going to be passing through, but no one joined us until the day we left.  Works for us!

Rudder Cut Cay is a private island owned by David Copperfield.  While we weren’t allowed to walk on the beach, we were still able to enjoy one of the prettiest anchorages that we have seen on this trip.

We were anchored by a cave that was a popular stop for tour boats, which we watched come and go throughout the day.  When everyone was gone we went over to explore at low tide.  It didn’t go back very far, but it was still pretty cool. 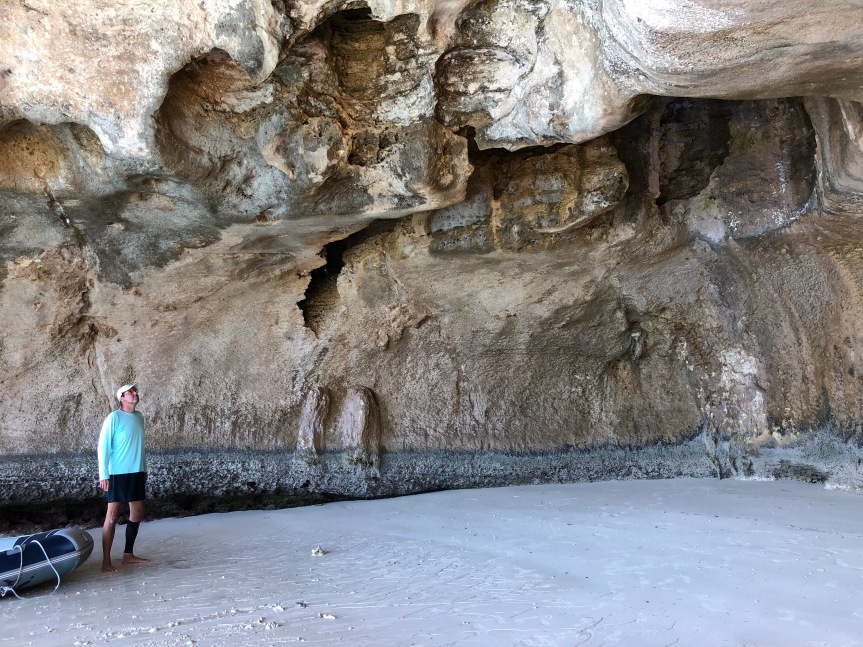 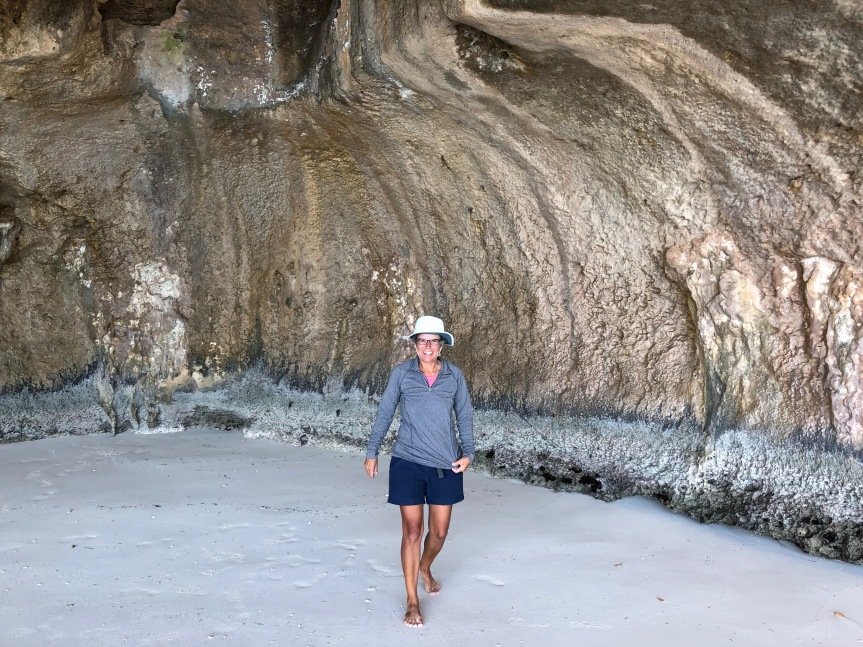 After the front passed we were off again, this time to Little Farmers Cay.  As seems to be typical for us, a squall approached as we were nearing the anchorage which made things entertaining, but the Rocna bit right away (we love our anchor) and everything settled down soon enough.

We have found the water clarity in the Exumas to be amazing, and Little Farmers Cay did not disappoint.  Here is our anchor chain, fifteen feet down:

The cay was aptly named since the settlement at Little Farmers Cay was certainly little, but we went for a nice walk and picked up some potatoes and onions at the market.  People weren’t kidding when they said you should stock up with food before going to the Exumas.  With the exception of the market in Georgetown, the provisions on the grocery shelves have been very sparse unless it’s within a day of the mailboat’s arrival.  At this point we are virtually out of snacks – the horror!  At least we still have a fair amount of popcorn kernels.  Next time we’ll definitely bring more snack food before leaving the states.

To make up for the lack of snack food on Pegu Club, we decided to treat ourselves at Ty’s Sunset Bar and Grill.  As we were walking there we met S/V Nina, anchored on the other side of the cay.  We all enjoyed a nice afternoon at Ty’s, talking boats, sharing tips, and getting to know each other.  Although we are headed in opposite directions, we definitely hope to share an anchorage with them at some point in the future.  As for Little Farmers, we absolutely want to return next year for the Five F’s Festival: First Friday in February Farmers Cay Festival.