It was another fun ride down the East River from Port Washington.  High winds the day before had stirred up the water but it wasn’t noticeable until after we went under the Verrazzano Narrows Bridge.  Then it was VERY sloppy for a few hours with the wind on our nose and against the current until we were inside the tip of Sandy Hook.  45 minutes later we were anchored in our regular spot behind the Atlantic Highlands break wall (I think three visits makes it a regular spot, don’t you?). 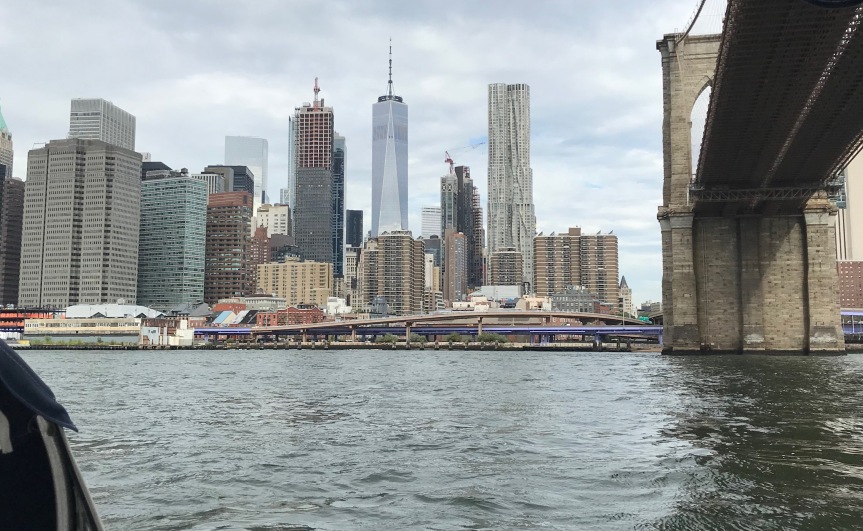 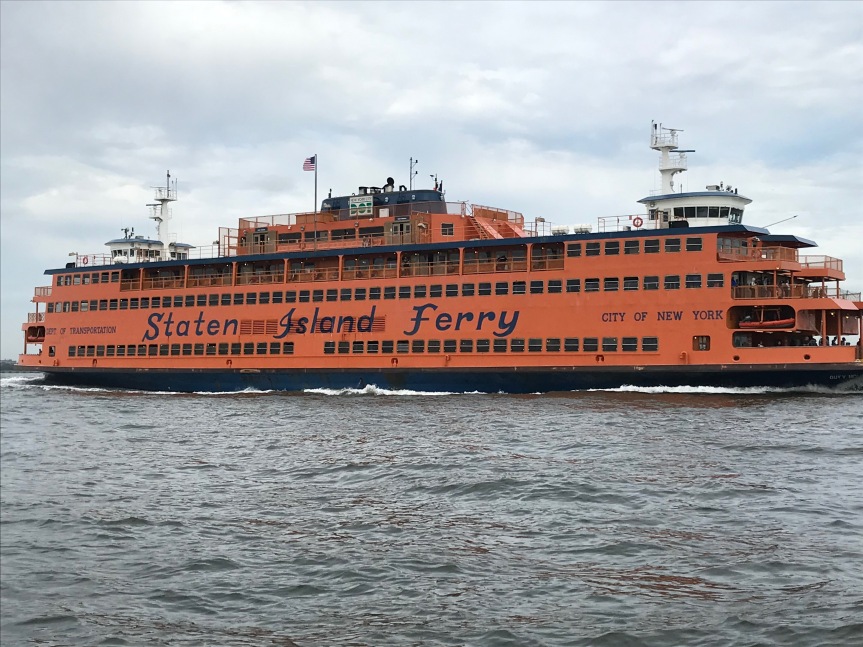 Now I will readily admit that I was NOT looking forward to going down the Jersey coast.  Even though we had a windless, uneventful trip from Cape May to Atlantic Highlands a few months ago, this was going to be the same direction as our trip from hell last fall, and it was absolutely messing with my mind.  My nerves were NOT helped when I saw the waves near the hook as we went inside towards Atlantic Highlands.

Initially we thought that we were going to be leaving the next day, but as I obsessed over the forecast I started getting increasingly skittish.  Winds were going to be from the northwest and north, gusting into the low 20’s before slowly dropping, and the waves were supposed to be around 4 feet with a 6 second period and then decreasing in size.  I think if it hadn’t been so awful last year we would have done it, especially since the wind was going to be behind the beam, but I just couldn’t get comfortable with the idea.  I posted on the Women Who Sail Facebook page and received a lot of encouragement to listen to my gut.  Jeff was ready to go for it, but we have a rule on our boat: the most conservative person wins.  So we decided to wait.

In hindsight we definitely made the right call.  A few women making the same trip commented the next day on my Facebook post and said that it was a washing machine out there due to the remnants of Tropical Storm Erin passing offshore.  Given that we were already scarred with what happened last fall, it would NOT have been a good time.

Fortunately if you have to wait somewhere for a weather window, Atlantic Highlands is a good place to do it.  It’s very cruiser friendly with a dinghy dock and lots of shops, restaurants, and a large grocery store within easy walking distance.  Jeff and I took care of some chores and boat maintenance, and we spent a late afternoon hanging out with  Jim and Christine from s/v Ullr.

I had “met” Christine when she commented on my post on Women Who Sail.  It turns out they were anchored across the channel from us.  We met up at the Gaslight Tavern and hung out for a few hours, laughing practically the whole time.  When we discovered that we had both hit the damn Reedy Island dike on Delaware Bay, high fives were exchanged with enthusiasm (I’m so glad I can laugh about it now!).  Jim called the Delaware Bay “an unholy body of water” which was so perfect that I shamelessly stole it for the title of this post.  We’re definitely hoping to run into them again as we all travel south.

Finally after five nights in Atlantic Highlands we had our window – and not just to go to Cape May.  It looked like we could continue straight up the Delaware until the favorable current ran out on us!  That’s an option that never occurred to us until M/V Magnolia (who we met earlier this summer) did it last month.  Reading their blog post, I tucked it away as a possibility if the weather and the currents lined up.  Now it appeared we were going to get lucky.

The forecast called for a sunny day with winds from the northeast and clocking to the east – but not so strong as to build up a ton of fetch like last fall.  The waves were actually going to be reasonable in size and period.  The day after called for wind in the mid-teens on the Delaware Bay, but behind the beam, and the current would be with the wind so we knew we could handle that.  Yep.  It was go time.

What followed was a very reasonable passage.  The wind stayed strong enough to sail for 2/3 of the trip down the coast which meant that we could use Bob, making for a much easier trip.  Even though we didn’t have a moon (will we ever have a moon going down the Jersey coast?), we had clear skies so that we could still see the horizon, and I watched a great Labor Day weekend fireworks show near Barnegat Bay while Jeff was sleeping down below.

As we approached the Cape May inlet we had some lumpy seas pushing us around which gave me a few white knuckles as I steered us between the jetties.  But soon enough we were ducking into the Cape May inlet, doing a quick weather check while motoring towards the Cape May Canal to make sure that it was still a good idea to continue, and popping out onto the Delaware Bay.  Compared to last year, it was easy-peasy.

The Delaware Bay gave us a sleigh ride almost 2/3 of the way up.  We had plenty of wind for sailing, but we weren’t screwing around.  We wanted to get off of this unholy body of water as quickly as we could.  We motorsailed with both sails up, the wind and current pushing us along at well over 7 knots (sometimes 8 knots) before we ducked into the Cohansey River to anchor.  Another 149 nautical miles down.  You’ll notice we didn’t get anywhere close to the Reedy Island anchorage!

The Cohansey River proved more than adequate as a rest stop, and our Rocna held us firm in the 3 knot current.  We agreed that next time, however, we would sleep in the main cabin.  The current was strumming our anchor chain like the devil’s banjo (as Jeff so descriptively put it), and the humming made for a less-than-peaceful night.  That aside, we wouldn’t hesitate to use the Cohansey as an anchorage again.

The next morning we were back on the Delaware as soon as the current turned in our favor with only twenty miles to go before entering the C&D Canal.  Conditions were identical to the day before and we chugged along.  Before we knew it we were finished with the Delaware, through the canal, and pulling into S/V Minx’s slip at their marina on the Bohemia River.  Currently cruising in New England, they had kindly offered it up to us while we kept an eye on Hurricane Dorian.  After getting the dock lines squared away we gave each other a big high-five.  The worst part of the entire trip south was over – we had made it down the New Jersey coast and up the Delaware.  Now it was time to enjoy the beauty of the Chesapeake Bay!

4 thoughts on “An unholy body of water.”