The water in the Exumas is unquestionably gorgeous, and it feels like you could spend months here in a different anchorage each night. But one thing it lacks is an abundance of anchorages with good all-around protection from the wind. As a result, you will generally find yourself sharing one of the decent anchorages with a bunch of other boats. Not a big deal if nobody drags, but as we witnessed in Norman’s Cay, you can’t necessarily count on that. So with those events fresh on on our mind and another front coming in, we decided to head to Pipe Cay.

Pipe Cay was one of our favorite anchorages last year. A quick five mile hop from Staniel Cay, we decided to head over there just before high tide to see if we could sneak into the back on the northwest side of Little Pipe Cay. Last year we had seen one boat anchored there, and it looked skinny but doable on the charts.

It was a cloudy and windy morning and we were keeping an eye on a big squall heading our way as we motored over. Fortunately it dissipated before arriving, but by the time we were entering the Pipe Cay channel I was out of sorts.

The area didn’t look at all like I remembered, the depths weren’t matching up with the charts, and with the clouds in the sky it was really hard to read the bottom. At one point I saw one foot beneath the keel and rocky ground below us. The pucker factor was real. There was a very large ketch anchored in the main anchorage and we thought about going towards him, but when I saw one foot under the keel again as we approached, I balked. By now I was shaking from nerves and we quickly debated what to do.

At that moment the sun peeked out and we could see a deeper path, so we decided to go back to our original plan and try to sneak into the back. As we crept along the depth sounder showed we had an increasing amount of room under our keel, matching what we were seeing, so my nerves settled down and we popped out into an awesome anchorage.

We had found the holy grail in the Exumas – virtually 360 degree protection in an area that was deep enough for basically one shoal draft boat. Of course given how skinny the water was as we made our way in, it was entirely possible that we would be stuck there for the rest of our lives with someone stumbling across our skeletons some day, but at least we were well protected from the upcoming front!

What followed were six delightful days. We explored a bit in the dinghy on a windless day before the front arrived, and Jeff said the water was so clear it was like being in a glass bottom boat as we floated above fish and coral. We watched windsurfers zoom by when the front arrived (Pipe Cay is a popular spot for them), we read books, and just generally relaxed and enjoyed having an anchorage to ourselves. 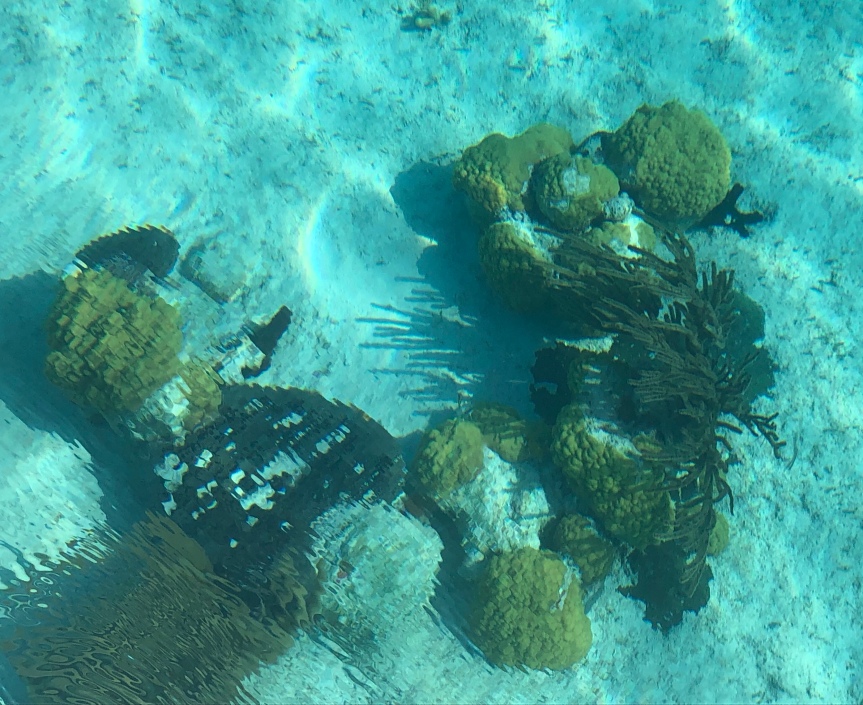 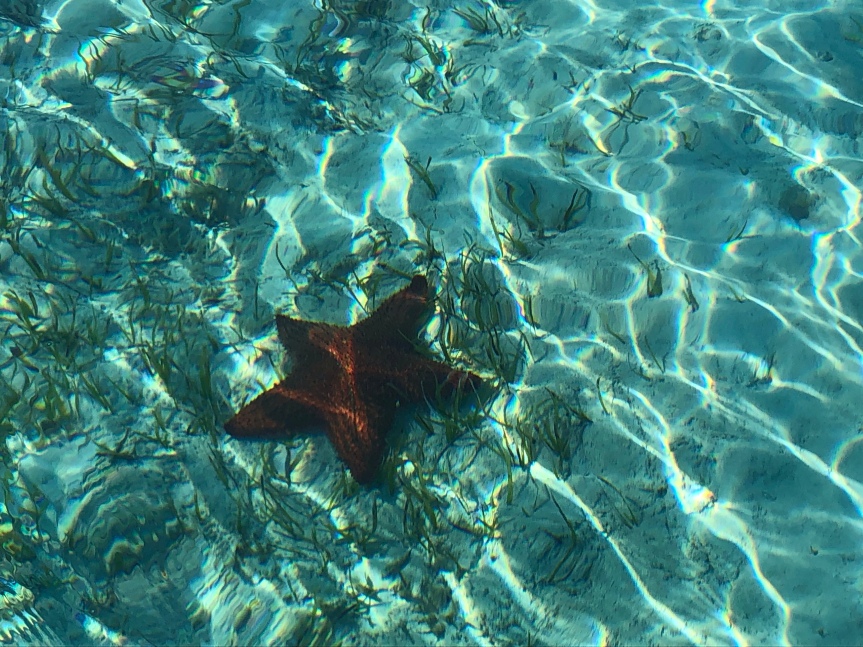 The surrounding water was so shallow that there was minimal fetch as the front clocked around, and we agreed that as long as we could actually find our way out without running aground, we would absolutely make this our hidey hole for future fronts if we were in the area.

While I was fretting about being able to leave the anchorage, Jeff did not share my angst. He was confident that we wouldn’t have any trouble. I really wanted to share in that confidence, but I knew that on the day we were planning to leave high tide was going to be .9 feet lower than it was when we arrived. Given that we had only a foot to spare when we came in I didn’t like those odds, so after the wind settled down I decided to go out on the paddle board at low tide to find a deeper way out.

Pegu Club draws 4’4″ so I measured five feet on the paddle to give us a buffer. Carrying our handheld waterproof Garmin, I started marking waypoints whenever I found good water, every twenty yards or so. After about a half hour of plunging the paddle into the water, trying to hold it straight up and down while fighting the increasing current, I made a mental note to buy a handheld depth sounder this summer!

Once I felt I had a sufficient number of good waypoints, I went back to the boat and put the waypoint coordinates in our chartplotter. Now I had a route of deeper water that would hopefully lead us out with a minimum of angst, as long as I had done this correctly. 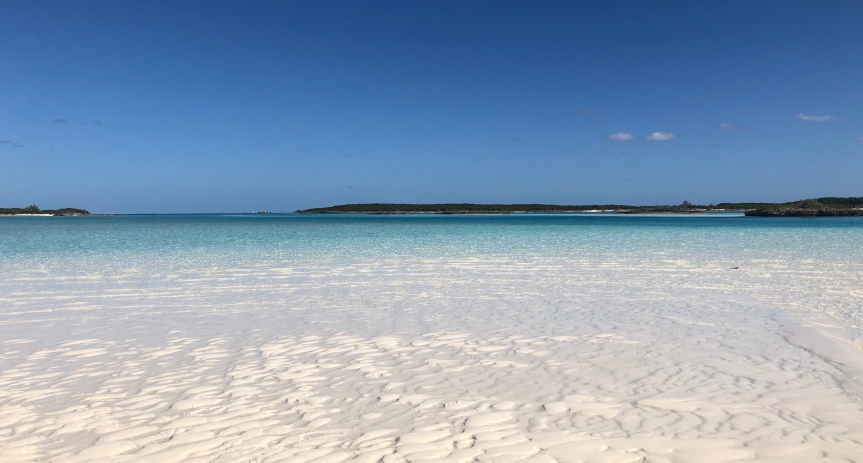 The next day we raised the anchor about an hour before high tide and started creeping out. Jeff stood on the bow with the handheld VHF, encouraging me with his reports of what he was seeing on the bottom. Following the waypoints, the shallowest depth I saw was 3′ under the keel. Now that was MUCH better!

Before we left the anchorage I remembered to start a new track on the chartplotter in a different color from the track going in, so now we can return to the anchorage on a rising tide any time we want with no angst. YES! But in the interim, it was time to head back to Staniel Cay and continue our adventures.

4 thoughts on “Hiding out in Pipe Cay.”