After finally escaping George Town it was time to head back to Lee Stocking for some more hiking, snorkeling, and lazing about on Boneham Beach. The Cruiser’s Regatta had finished so we joined an exodus of about fifty boats on a fantastic day for sailing.

We had a great, rollicking sail and joined about 25 other boats in the anchorage. Hmmm. Not what we had in mind, given that there were 8 or less the last time we were there. However, we figured a large number of the boats were on their way back north to head home. Since we weren’t leaving the Bahamas until late May, we decided to wait them out and let the crowds get well ahead of us.

Our strategy worked with more boats leaving each day, so that by the end of the third day there were only four of us, well spaced out. Ahhh. Much better. We needed to renew our immigration in a few weeks, so we decided we’d stay in Lee Stocking for the rest of the week, move north a bit, and then if the weather permitted we’d head to Barreterre and rent a car to drive to the immigration office in George Town, saving us a 25 nautical mile beat into the prevailing wind.

Enjoying the view from another hike on Lee Stocking. 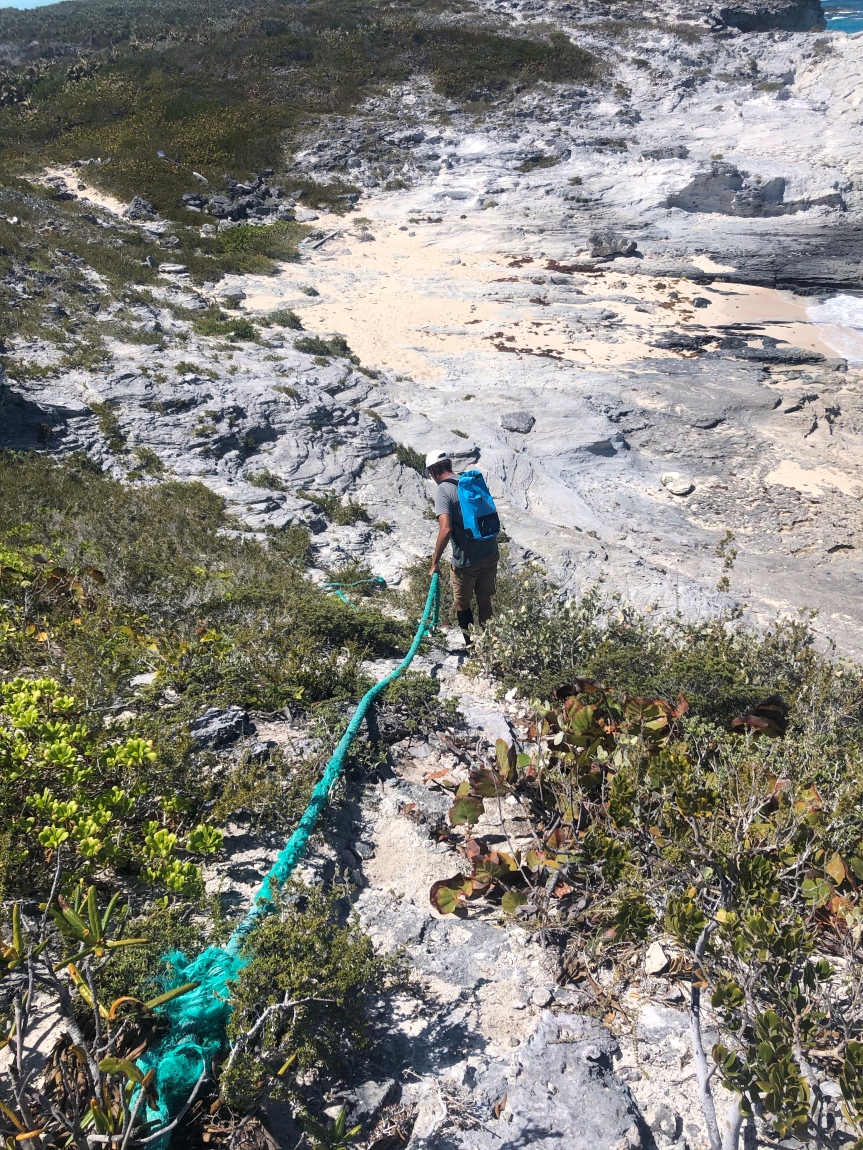 We keep up with the news online while in the Bahamas, and as each day passed in Lee Stocking the increasing restrictions resulting from COVID-19 resulted in repeated discussions each day regarding whether we should consider going back to the U.S. early. Staying in the Bahamas meant a reduced risk of exposure (which is a concern given Jeff’s CHF), but there are only two hospitals in the Bahamas – both requiring an airplane flight to get there – and the quality of medical care in the U.S. would be better if it was needed. If we stayed in the Bahamas we could keep enjoying the beaches and the pretty water, which we couldn’t do in the U.S. We balanced the risks and decided to stay for now.

Then the U.S. issued a Level 4 travel warning, telling U.S. citizens to return to the states or be prepared to stay away for an extended period of time. Hmmm. Obviously they mean people that need to fly home should do it because flight cancellations were increasing every day, right? The fact that there people who can return to the U.S. on their own private vessel undoubtedly hasn’t crossed anyone’s mind in the State Department, right? Even if all flights were grounded we could still get back on our own. It would be unprecedented to close the borders to U.S. citizens, and some legal research on my part (you can never take the attorney out of the girl) revealed that it would be legally questionable. And even if it happened, they can’t guard the entire eastern seaboard, so. . . . Once again, we decided to stay for now.

Next, the Bahamian government gave the Prime Minister the authority to exercise emergency powers, and an order was issued establishing a curfew, closing non-essential businesses, and prohibiting inter-island travel for certain vessels. I participated in a robust debate on one of the Bahamas Facebook pages about whether that pertained to cruisers (there’s that attorney thing again), arguing that it did not. But once again we revisited the question of whether we should leave. We needed to renew immigration in 2 1/2 weeks. What if they wouldn’t let us renew? What if the restrictions became more severe? We didn’t have a legal right to stay in the Bahamas indefinitely unlike back in the U.S.

Frankly by this point a lot of the fun was getting sucked out of the trip. Other countries in the Caribbean chain were becoming increasingly restrictive to varying degrees – sure glad we had already decided not to go to Luperon this summer! – and we didn’t know what the future would hold in the Bahamas.

We didn’t want to leave the beautiful water and beaches, especially now that the weather was finally beginning to settle down. But it was time to put on our big boy and big girl pants and do it anyway. Bottom line, the health care was better in the U.S. if we should need it and we had a legal right to stay there forever. We had an excellent weather window starting in 36 hours, and there was no guarantee of similar conditions should we be required to leave at some point in the near future. It was time to go, and we knew it was the right decision for us.