After a short haulout at Cobb’s Marina in Norfolk where we gave Pegu Club two fresh coats of bottom paint (please let this paint last for two years!), we shoved off on a windless day.  After the shitshow that was our trip from Mobjack Bay to Norfolk, that was more than fine with us.  Dolphins entertained us as we motored towards mile marker zero on the ICW, and we cheered as we passed it for our third trip south.

It might be because we have finally gained the experience to pick our weather windows, but the trip so far has been our smoothest and best one yet.  The Albemarle and Pamlico Sounds were calm, and we’ve seen tons of wildlife – bald eagles, turtles sunning on logs, a huge snake swimming through the water (I thought it was a large branch at first until I saw it undulating), and a small Kermit-green frog even hitched a ride until Jeff discovered him on the side deck as we were leaving the anchorage and used a winch to poke him back into the water. 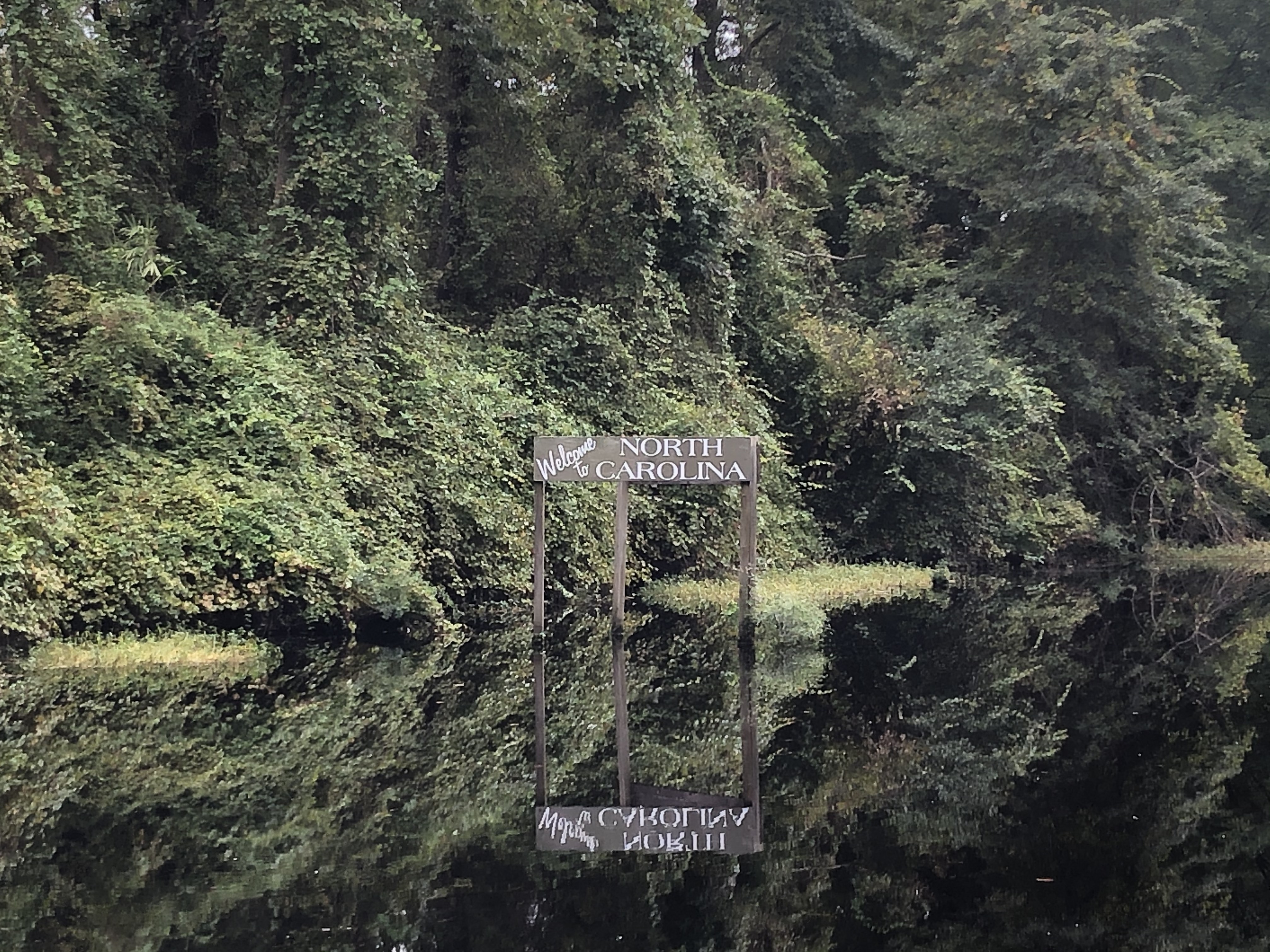 Continuing our string of good luck, the wind and current aligned to give us a big jump when we were able to cover 62 nautical miles from the head of the Alligator/Pungo Canal all of the way to just north of Oriental.  We had planned to anchor just south of Belhaven (deciding reluctantly as we did last spring to skip it based on its population’s almost universal disregard of mask-wearing), but we approached the area of the anchorage so early in the day that we made a last-second decision to continue pushing on – something that only worked because we still had twelve hours of daylight.  Yes, we are rolling the dice moving into the hurricane zone this early, but between the better weather and the longer days, it’s been worth it so far.  Check with me again if a hurricane approaches!

Perhaps the highlight of the trip so far, however, is that we were finally able to really experience the Dismal Swamp’s Robert Peek.  The lockmaster for the Deep Creek lock (which is the first lock when heading south) and legendary among cruisers, we had read in many blogs about how friendly he was, his expert conch-horn blowing skills, and his encyclopedic knowledge of the history of the Dismal Swamp.

Although he was on duty the very first time we went through in 2018, we were literally the last boat to enter the lock and it was VERY crowded that day, so we weren’t able to experience the full Robert.  However, when we told him it was our first time in a lock he was so kind and informed us so well as to what to expect that he instantly removed any nerves we felt.  Being in the very back of the lock, we weren’t able to hear his stories (or even the conch horn), but we were hopeful that we would catch him on our return trip in the spring.

Well, that spring we took the Virginia Cut instead of the Dismal Swap, and in our second cruising season Robert wasn’t on duty for our north or south bound trip, but this time luck was finally with us.  We were one of only two boats (and we were first in the lock), so we were able to meet him, chat with him, get a conch blowing lesson, and share some laughs.  We were thrilled.

Everything cruisers had said about Robert was true.  He was so friendly, and obviously passionate about his job.  Normally when cruisers stay overnight at the dock he invites them to the dockmaster’s office in the morning to shoot the breeze over coffee and donuts.  While we were going to be staying at the dock that night, he was about to start a four day weekend so we were going to miss out on that experience, but Jeff and I hoped we would get that chance this upcoming spring when we return north.

So you can imagine our shock, six days after going through the lock, when I read on the Dismal Swamp Welcome Center’s Facebook page that Robert had suddenly died.  We were stunned, and so sad.  He was obviously a very special person, and there have been hundreds of comments from cruisers sending their love to his family and sharing their stories.

Our friend Chuck Fadely from S/V Aurora took this video of Robert giving him a conch horn blowing lesson. Be sure to click below so you can watch a small sample of Robert’s magic.

Robert was a legend on the Dismal Swamp Canal, and it truly won’t be the same without him.  We feel so grateful to have had the chance to meet him and spend some time with him – something that wouldn’t have happened if we hadn’t decided to head south early.