With sanding off of the table because of high winds this past weekend, it was a good time to take care of some miscellaneous items on the boat.

First up was removing the remaining chainplates.  We had pulled three a few weeks previously, but we wanted to get the last four before the boat was shrink-wrapped for the season.  It was a bit dismaying to see how easily the bolts turned – I almost didn’t need the socket wrench to get them started.

This project gave me a flashback to August when we removed the head and holding tank back.  I was inside the hanging locker (which is in the bathroom) unbolting one of the chainplates, and Jeff was up above pulling it out.  My nose was six inches away from the chainplate and when Jeff removed it, I was hit with the sickly sweet and sour smell from the summer.  Geez – that smell really was everywhere in the boat!  It was a great reminder of how much better Pegu Club is now.

We knew we would want to replace them before we cut the lines, but based on how they look I’m glad we’re doing it now.

The chainplates play a very large role in keeping your mast up, because the stays are attached to the mast on one end and attached to the chainplates on the other.  While not exactly cheap to replace, they also will last for an extremely long time so it’s unlikely we’ll need to buy them again.

You can’t go to Defender and buy chainplates for a Bristol 29.9, so we’ve dropped them off at a local machine shop to have replacements made.  They should be ready in January so we’ll have plenty of time to reinstall them before we splash on April 30.

Besides removing chainplates, we also removed additional dead wiring (where does it all come from?), stared at our existing wiring for awhile trying to figure out where everything runs, and put the stanchions and lifelines back up.  Now she’s looking more like a sailboat!

Finally, we decided to take care of the wire slap in the mast.  Almost immediately after we had paid for Pegu Club and the owner had motored away in his dinghy, we heard it – slap, slap, slap, slap.  What the heck was that?  We quickly discovered it was the sound of the unsecured wires inside the mast, slapping rhythmically as the boat rocked back and forth.  Between the odor and the slapping, I have no idea how we slept that night back in August.

This was going to be an easy fix, and there was absolutely no way we wouldn’t be taking care of it before she splashed again.  The sound was enough to drive a person mad.  After we had hauled Pegu Club out of the water, our mooring neighbor Vincent had stopped by for a visit while we were cleaning her up.  He casually mentioned that wire slap could be taken care of with some pool noodles.  Geez – even he could hear it.  So Sunday was the day to fix the issue lest we be thrown out of the club when the sailing season starts again.  Ultimately, this small item on the to-do list was the perfect example of why almost nothing is a simple project on a boat.

We pulled it all out, peered up the inside of the mast with a flashlight, and saw this: 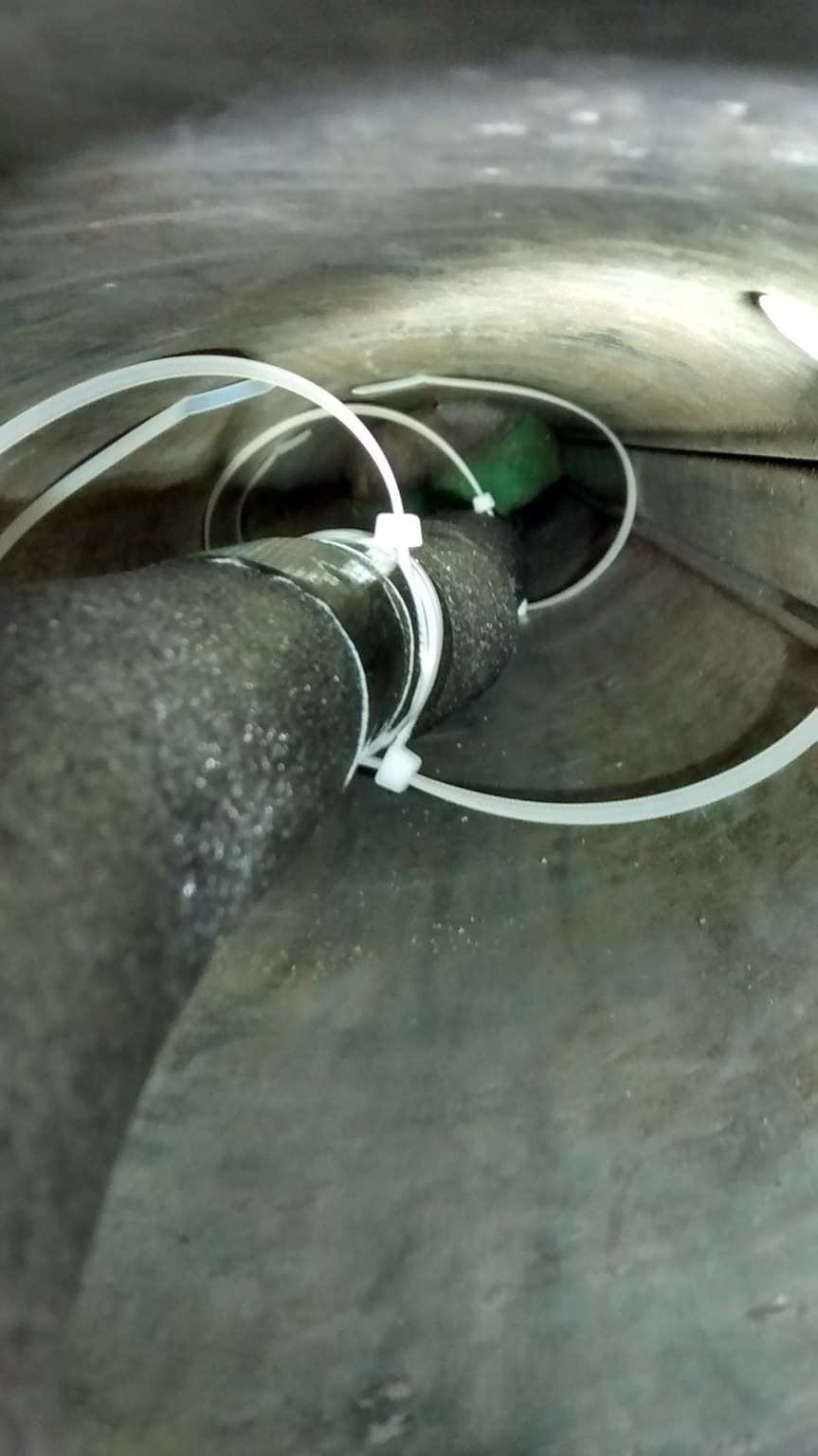 There was something green shoved in there, blocking our path.  Now how were we going to get it out?  We thought about what we had on the boat (not much) and what we could find in the clubhouse.  After some thinking and traipsing around the yard, we ultimately Macgyvered a contraption consisting of a coat hanger duct taped onto the end of our (fortunately) expandable boat hook.  After some careful maneuvering, the green thing came out, along with an additional purple thing: 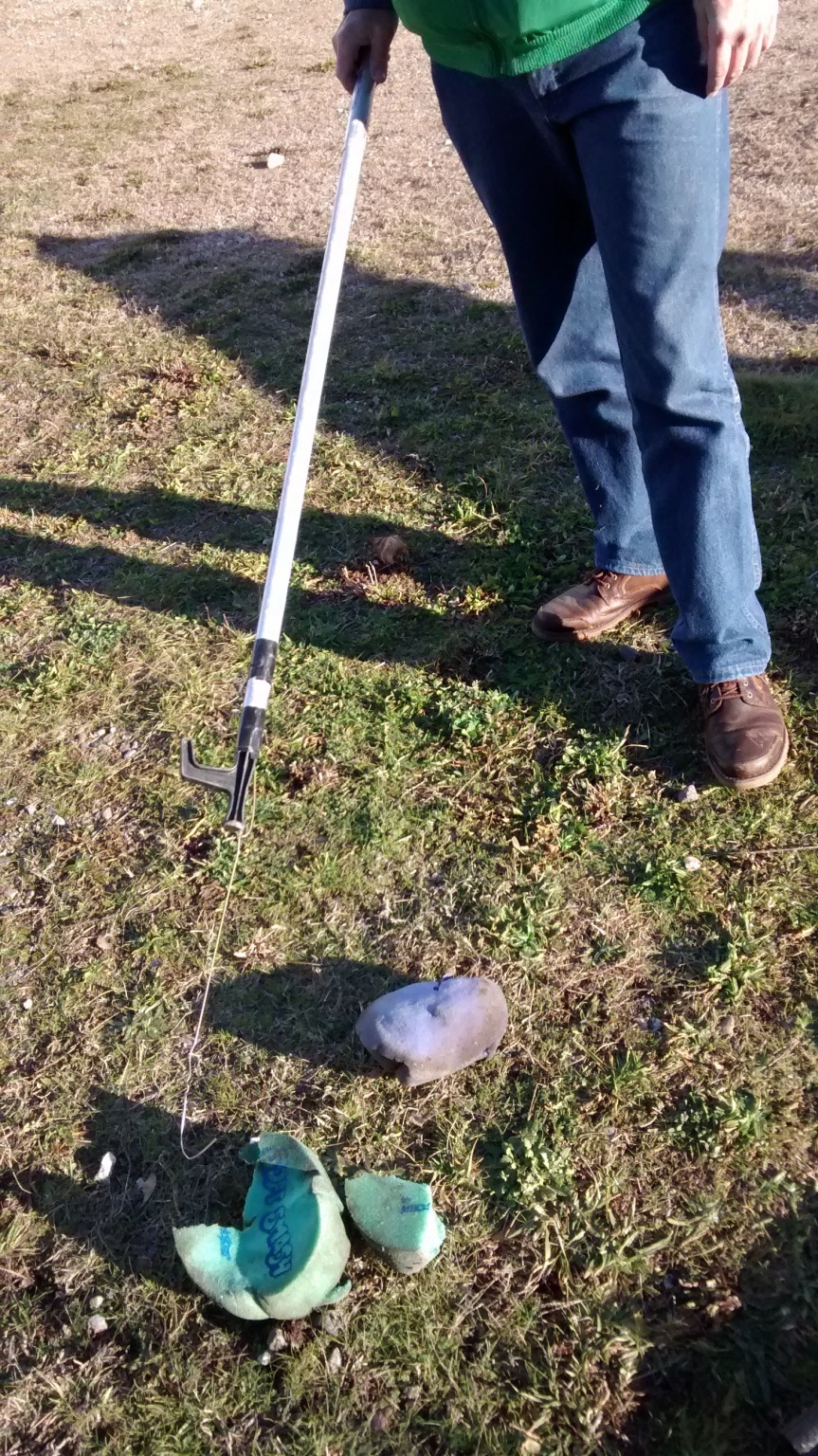 It looks like someone had already attempted to do a half-assed fix by shoving a few pieces of foam up the mast.

With the impediment removed, we were back at it, shoving foam tubes up the mast until we were stopped by the piece of metal at the spreader level, which we expected.  Hopefully this will do the trick!  Unfortunately there’s no way to know for sure until we get back on the water, but it appears to be the standard treatment for this problem.  Worst case scenario, if it doesn’t work we’ll unstep the mast right away and try something else.  In the meantime, it was another item crossed off the to-do list and we drove home satisfied.

This Saturday looks like it has the potential to be a good day for sanding.  We’ll see if it proves to be as bad as scraping.  We hope not.

4 thoughts on “A small example of why every boat project takes longer than anticipated.”