We’ve been keeping busy doing random boat work since hauling Pegu Club out for the off-season.  The shut-off date for water in the yard was November 4th, so we made sure to give Pegu Club a much needed bath before it was too late.  With her deck and hull washed and her stainless polished, she was put to bed for the winter nice and clean.

Pegu-teeny was also hauled out of the water, and her carpet of marine growth scrubbed away.  That’s a gross job – one we had to do several times this season.  Now that we know where her waterline is, next season we’ll put a coat of hard bottom paint on her before she goes into the water.  We use ablative bottom paint on Pegu Club, but we don’t want to use it on Pegu-teeny because it will get all over the foredeck when we haul her up there for longer trips.

Pegu Club was also winterized, which is a very easy job when you don’t have a standard marine head or pressurized water system.  All we had to do was empty her water tanks, change the oil, and run anti-freeze through Thumper.  The anti-freeze process was zero stress, unlike last year which had been the first time we winterized an engine.  We had read last year that all we needed to do fill a bucket with anti-freeze, putting the raw water intake hose in the bucket, and run the engine until anti-freeze came out the exhaust.  We were skeptical that it would actually work, and we nervously started the engine promising that we would shut it off if anti-freeze didn’t start coming out the exhaust within 15 seconds.  Needless to say, it worked, so this year we flushed the engine for ten minutes with fresh water and then put the anti-freeze in.  No problem.

Jeff and I also spent quite a bit of time staring at the mast.  We took the top off which was surprisingly easy, and debated running the halyards externally (they are internal right now).  We also measured the dent above the upper tang (the subject of a future blog post), and we discussed how to get rid of our wire slap problem once and for all.  The noise is coming from the wiring for the wind instrument.  We confirmed this when Jeff grabbed the wire and flicked it against the mast.  Ack!  It was the sound that tortured us all season!

Now that we know how to take the top off of the mast, we’re going to put foam pipe insulation around the wire down the top half of the mast before we splash in the spring.  Last winter we went from the bottom up and had to stop when we hit the bolts where the spreader sockets are attached.  We had hoped it would be enough, but discovered as soon as she hit the water that it wasn’t.  Being able to go from the top down should definitely take care of the problem.  If it doesn’t, we’ll have to unstep the mast right away and try another solution before our dock neighbors hate us.

Finally, we repaired the damage that we had done to our keel when we ran aground.  Fortunately none of the gouges went all the way through the lead ballast, so this ended up being a pretty simple repair.  Jeff beveled the area with the sander as best as he could given the limited space he had to work with (a 12 to 1 ratio was impossible in this situation, but at least we weren’t filling a through hull), and discovered evidence that the keel had been patched before.  Looks like this isn’t the first time Pegu Club had run aground!  Fiberglass cloth circles were cut and epoxied onto the big gouges, and neat resin was painted onto the lesser ones.  Mother nature cooperated with some days in the 60’s, and when we returned a week later everything was hard.  We’ll sand and fair it in the spring, put some barrier coat and bottom paint on, and she’ll be as good as new. 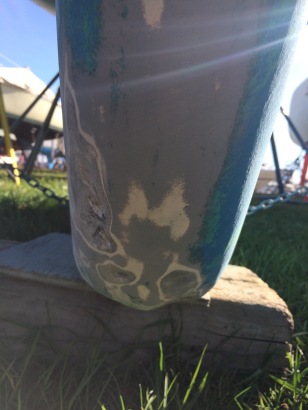 Sanded on the top, patched on the bottom.
It will look better when it’s faired in the spring.

With our random tasks complete and the keel repair well on its way, it was time to turn to our first “real” project of the off-season and a brand-new project for us: dealing with the stuffing boxes on the shaft and the rudder.