Before the season began I noted to Jeff that this was going to be our fourth season owning a boat and we had yet to truly worry about a storm.  I had a feeling that our luck would be running out soon.  As we proceeded to enjoy one of the hottest summers on record on the Connecticut shoreline, and the water got warmer and warmer, I was even more certain that our streak would end.  And so it has.  But fortunately, while Hermine was concerning, we didn’t feel that we would need to haul Pegu Club out of the water.

We had hoped to spend Labor Day weekend at Three Mile Harbor or maybe Essex, but by Wednesday it was clear that wasn’t going to be happening.  After reading all of the forecasts and weather data that we could get our hands on, we decided that while we didn’t need to haul Pegu Club, we did need to tuck her in.

As we drove down on Saturday we debated just how much we were going to prepare.   While the forecast was improving, we knew that if we woke up on Sunday and things had taken a turn for the worse it was going to be too late to do anything at that point.  Ultimately we decided that we were better safe than sorry.  We’ve put too much work into Pegu Club, and become too attached to her, to be cavalier.

Things were busy at the club with storm preparations.  People at the docks were adding extra lines and fenders, and Charlie was busy shuttling other people back and forth to their moorings.  After chatting with a few members, we started rowing Pegu-teeny into a decent headwind.  Charlie saw us as we approached the fuel dock and offered us a tow with the launch, which was a blast.  It reminded me of an E ticket ride at Disneyland!

Within a few hours we had the jib down, removed the dodger, wrapped the mainsail cover, put fresh fire hose on our mooring lines for anti-chafe (the fire hose we had been using all season was getting a bit tattered), removed the grill and outboard from the stern rail, and removed the anchor from the bow.  Some people hadn’t done anything to prepare, and  others had done what we had plus removed the mainsail and boom.  We briefly debating doing the same thing, but decided (read: gambled) that it wouldn’t be necessary.

Fresh firehose in the chocks on the left, and a tightly wrapped mainsail on the right.

With plans to go to the home of Little Bristol’s former owners for dinner that evening, we worked quickly and found ourselves with a few hours to kill.  Opening a beer and cider, we relaxed in the cockpit commenting that it felt like the calm before the storm.  Eventually it was time to head out, and we reluctantly left, waving goodbye to Pegu Club.  I told her to stay safe, and crossed my fingers that all would be well. 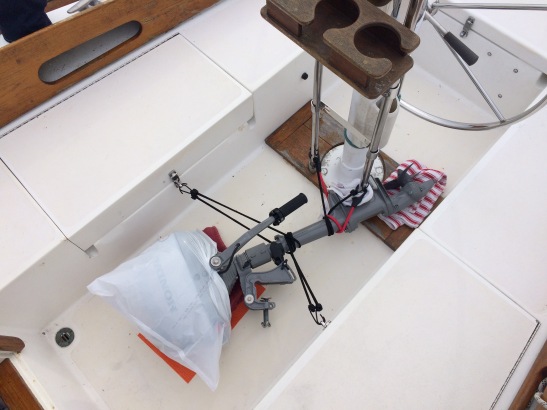 Pegu-teeny’s outboard is secured in the cockpit, and the anchor eventually went into the car.

Postscript: Thankfully Hermine ended up a bit farther away from Groton than what was forecast.  Although winds were in the steady upper 20’s/low 30’s with gusts up to 50 for about two days, they were from the northeast which left Pegu Club well protected from the winds and waves.  Southwest winds would have been a different story.

UConn’s Avery Point campus has a webcam which allows us to look at Pine Island Bay.  Although Pegu Club is just out of range, we can see other boats in the mooring field which gave us an indication how she was faring.  I didn’t get a call from Chris the dock master so I think it’s safe to assume that she didn’t wash up on the rocks.  🙂   Hopefully that will be our only storm of the season.