With Jeff and I both needing to work on Sunday, the weekend of September 24th was going to be a short one on Pegu Club.  We made the most of it though, with a fun four-hour sail with wind conditions that made us very glad we didn’t have a specific destination to get to.

Now that fall has officially arrived the temperatures have definitely gotten cooler, but with bright sunshine warming our all-black clothing, we were quite comfortable.  While I prefer sailing in t-shirts and shorts, I have to admit the cooler temperatures definitely opens up the water a bit more.  People start hauling their boats out right after Labor Day, and as each weekend passes we see fewer and fewer people on the water.  It’s substantially more peaceful than it is during the height of summer.

The forecast called for a high of 72 degrees with winds of around 10-15 from the north.  They got the temperature right, but the winds went from 8 to 15 to 6 to 13 to 20 to 7 to 18…you get the idea.  The wind direction was also far from consistent, veering from north to northeast and back to north again.  One minute we’d be heading due west, the next minute we’d be 60 degrees off of our heading to keep from pinching into the wind.  It was quite something.  I said to Jeff that it’s one of those days that had me feeling like I’m just a hack out there.  We were having a lot of fun though.

After heading out towards Long Island, we patiently tacked our way back towards Fishers Island, timing our last tack well so that we went right back to Shenny.  Maybe we’re getting better at this sailing thing!

Relaxing in the cockpit, we didn’t want to leave and briefly debated spending the night. Unfortunately we hadn’t really brought anything to do that, so we settled for enjoying a pretty sunset before reluctantly closing up Pegu Club for the week. 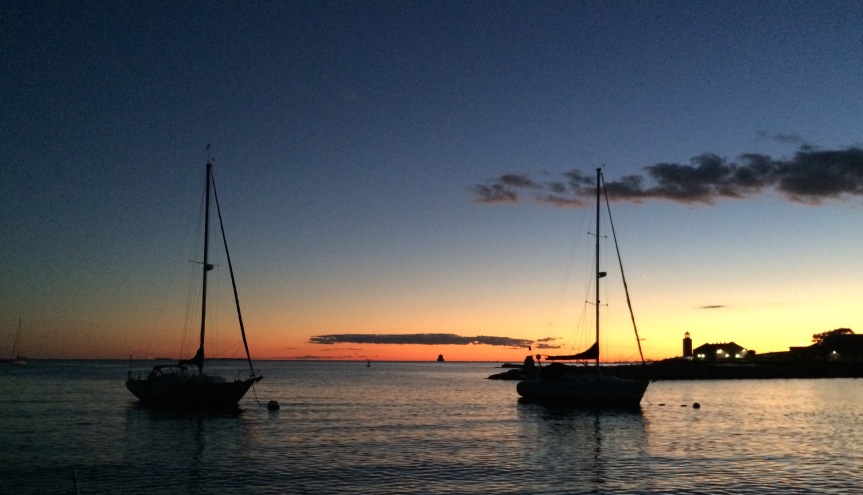 As we walked back up the dock after tying up Peguteeny, we ran into Jeff from s/v Infinity. We asked him if he and his wife had gone out sailing that day, and we all shared a good laugh as he described exactly the same experience we had.

7 thoughts on “We built some skills on this sail.”