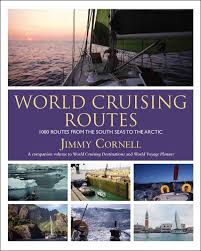 Jimmy Cornell’s World Cruising Routes.  I hadn’t heard of this book when I first saw it at Defender, but flipping through its pages I knew I wanted it.  It has nearly 1,000 sailing routes all around the world – information on winds, currents, tropical storm season, best time to go, etc.  With a price tag of $55.99 and several years to go before we leave, however, I decided to resist.  Researching the book a bit later, I discovered that this book is one of THE books that most cruisers have on their boats. The information in it is indispensable, and we were definitely going to buy it at the beginning of our final winter before cutting the lines.

Flash forward a few months later, and a co-worker was asking me what would be our first foreign country in Pegu Club.  It’s something Jeff and I enjoy batting around, so I told him right now we were thinking maybe Maine for the summer, then down the ICW to the Bahamas and into the Windwards via Bruce Van Sant’s “Thornless Path.”  It’s a common route for snowbirds.  “Really?  You wouldn’t want to go someplace else?”  It lit a spark.  I started thinking.  It reminded me that we don’t have to do the “standard” route.  In fact, that’s not really our style.  Where else would we want to go?  And that made me think of the Cornell book again.

One Defender Christmas sale later (lowering the price a bit), Cornell’s World Cruising Routes now sits on our coffee table.  How about a shake-down sail to Bermuda, stay for a month or so, and then sail to Maine or Nova Scotia for the rest of the summer?  Then back to Bermuda, stay for a few more months, then offshore to the British Virgin Islands?

Or maybe that’s a bit too ambitious.  Maybe we sail our way up the coast, through the Cape Cod Canal, then a mini-shake down by sailing straight to Bar Harbor in Maine, harbor hop down the Maine coast, spend some time in Boston, then down to Newport, jump offshore to Norfolk, VA, putter down the ICW until Charleston, then offshore to the Bahamas, then Cuba, then Mexico, then towards Panama?

What about heading offshore from Charleston, down the east side of the Bahamas, in between Cuba and Hispaniola, then into the Caribbean via the windward passage, sailing the south shore of the Dominican Republic, Puerto Rico, into the British Virgin Islands, and continue on from there?

“Really?  You wouldn’t want to go someplace else?”  It was a simple question, but it has provided hours of entertainment and joy.  We call the Cornell book “our book of dreams.”  We don’t read it every day, but it sits there ready for us to pick it up, thumb through the pages, and let our imagination take us away.  3 years, 3 months, and 17 days to go.

9 thoughts on “Our book of dreams.”