We were hoping to spend a lot of time sailing during my month off, but alas it was not to be.  Despite having four weeks off, between a delay in getting Pegu Club to Shenny, a trip to L.A. for my dad’s memorial service, multiple doctor appointments and cardiac rehab for Jeff, and a bad cold that I likely picked up on the flight back from L.A., we weren’t able to sail.  At. All.

So if we weren’t sailing, what the heck did we do?  Well, we did bring Pegu Club back to Shenny on Tuesday, June 5th.  Pegu Club had been splashed the week before, but her sea trial revealed that the new propeller needed to be repitched.  Sam at Dutch Wharf did yeoman’s work getting the propeller back to us as quickly as possible, so at 5:00 a.m. on Tuesday, June 5th we were at Dutch Wharf and ready to go.  It was an ungodly hour, but we wanted to take advantage of a  favorable current, and hopefully get to Groton before the forecasted rain and thunderstorms.  It was a nice sunny morning without a speck of wind.  What better way to break in the engine??

Big Red performed flawlessly.  It’s SO much quieter than Thumper was, and the lack of vibration was amazing.  At 16 hp, Big Red has more oomph than Thumper did at 12 hp, and the increase in power was striking.  We had called Beta in North Carolina to ask about breaking in the engine, so we put it through its paces alternating from 1/4 throttle to 1/2, 3/4, wide open, back down to 3/4, etc. the whole way back.  Seven hours later, we were back in our slip at Shenny! 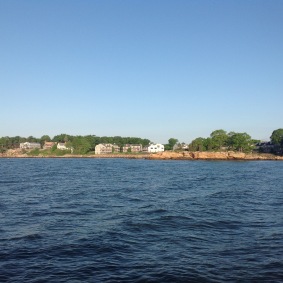 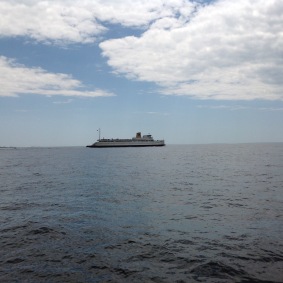 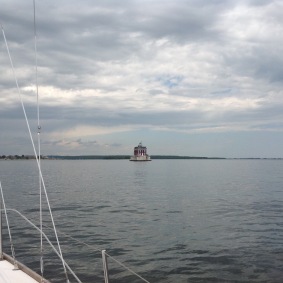 While we weren’t able to sail during my leave, we did manage to get a few things crossed off of the to-do list.  And of course, being a boat, sometimes things that were crossed off the list ended up reappearing!  For example, we showed up at the boat one day to find the VHF that we had previously installed lying on the floor.  It appears that 5200 doesn’t like to stick to Starboard.  We ended up finding slightly longer screws (but not so long that they would penetrate the deck above) and reinstalled it.  Cross it off the list again!  We also installed our new galley sink (the old one had to go as part of reinstalling the cabinet after Big Red was installed) and put the Whale foot pump back in place.  The next day, stepping on the pump, it fell off.  O.k.  Let’s try installing that one again!

Besides miscellaneous tasks, the two important items we installed were our B&G chartplotter and our USB charger.  The USB charger was quick and easy.  We had removed the old 12 volt charger  because it looked like a fire hazard (and looking at the back of it once it was out, I don’t think we were too far off on that one!).  The Blue Seas dual USB plus 12 volt charger was practically plug and play.  We installed it essentially where the old one had been, and now we can charge both Ipads and the Bose simultaneously if we need to.

The chartplotter wasn’t quite as easy, but overall it wasn’t too bad.  Jeff came up with an ingenious way to attach it to the pedestal guard using two stainless steel u-bolt crimped ears.  This was substantially cheaper than buying a Navpod or something similar, although obviously not as secure.  We’re going on the assumption that no one wants a 7″ outdated model.  Hopefully we won’t regret that decision, although we can always take it off if we feel we should.

To install it, Jeff drilled a hole in the pedestal guard and then another one in the cockpit floor under the foot of the guard to run the NMEA cable through.  After using a copious amount of sealant, the guard was back in place and we ran the cable to the NMEA backbone which was already connected to the battery.  Then we fired it up.  Nothing.  Hmm.

Our dock neighbor Russ was on his boat, and he also has a B&G Zeus, so Jeff disconnected ours to see if it was a problem with our installation or with the chartplotter itself.  Frankly, given that we bought it in a Defender blowout sale over 1 & 1/2 years ago, I wouldn’t have been surprised if we had a bad unit.  It worked on Russ’ boat, however, and he said that he had a separate power cable running to it.

I didn’t think we needed a separate power cable based on the installation manual, so I posted on Women Who Sail on Facebook and was quickly corrected.  Obviously the manual could be a bit more clear.  Anyway, off came the pedestal guard so Jeff could drill another hole on the other side for the power cable, then a second hole in the cockpit floor.  More sealant was used, we connected the power cable to our new Blue Seas panel, and fired it up.  Success!  Now we finally have a proper chartplotter that we can see in the sun and use in all weather.  We have been using our iPad since we bought Little Bristol, but having a real chartplotter before we cut the docklines was a mandatory purchase.  We’re looking forward to trying it out this weekend when we finally go sailing! 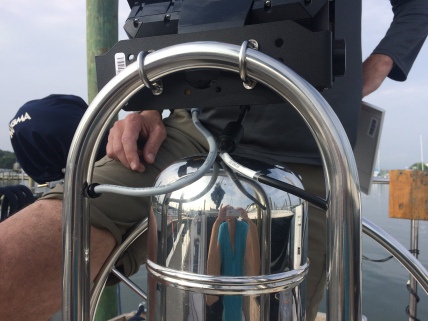 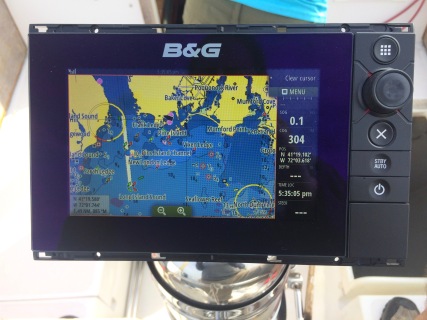