When we were waiting out the weather in Coecles Harbor we were thinking we would go straight to Port Jefferson which is about 48 nautical miles.  We haven’t made nearly as much progress heading south as we had hoped by this point, so we were feeling the need to get a move on.  However, when we were researching the timing of favorable currents down the East River in New York City, we realized that our next reasonable opportunity wouldn’t be until Thursday, October 4th.  Knowing that, there was no longer any need to rush.

Consulting our Waterway Guide, we discovered there was only one stop between Orient Point and Port Jefferson: Mattituck.  The village of Mattituck rests at the top of a two-mile long winding, narrow creek.  Based on the charts it didn’t look as if there would be enough depth for us, but a bit of internet research led to the discovery that it had been recently dredged.  It sounded cute, so we decided to break up the Port Jefferson trip into two shorter days by paying it a visit.

Entering the Mattituck inlet from Long Island Sound, it quickly became clear that the guide wasn’t exaggerating when it described the creek as narrow.  Jeff went up to the bow to help ensure that we stayed in the middle of the “channel” and we poked along, decreasing the throttle whenever the depth sounder showed the water under the keel getting close to 4 feet.  I figured if we were going slowly and we ran aground, we might have a chance of getting out without having to call for a tow.  For anyone reading this who is thinking about paying Mattituck a visit, the lowest I saw about an hour before low tide was 3.7 feet below our keel.  Our keel is 4’ 4”, but we rounded it up to 5’ for the depth sounder.

While the creek was narrow and fairly long, I wouldn’t hesitate to do it again.  In fact, Jeff and I agreed that next fall we’ll make Mattituck our first stop when we leave Shenny (assuming we take the inside route again).  The creek was enchanting, with scenery that made you feel like you like you were in Maine instead of Long Island Sound. 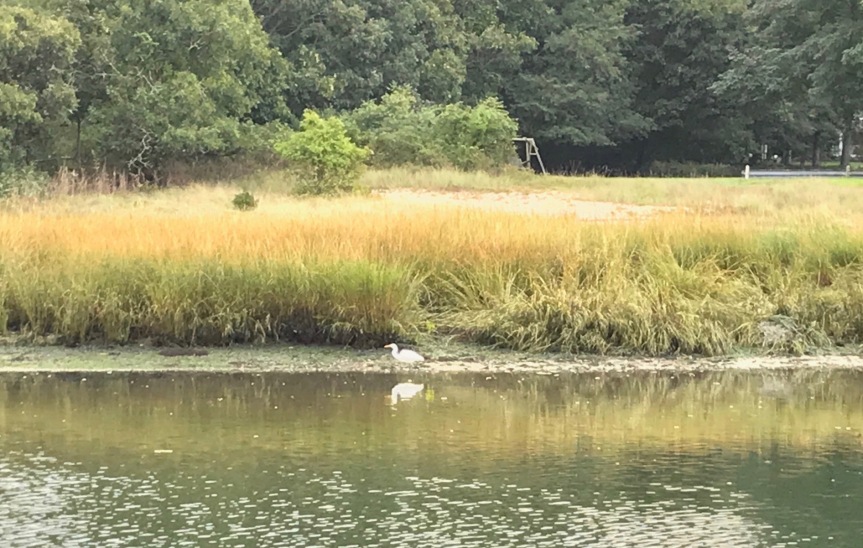 At the head of the creek is a tiny anchorage marked at each corner.  It looks like it can comfortably hold four to six boats, but from what I’ve read many more squeeze in on summer weekends resulting in bumper boats.  We wouldn’t even try to come here then.  Post-Labor Day during the week is probably ideal.  Fortunately there was only one other boat when we arrived, and we anchored in about six feet of water.  The anchorage has all-around protection and was dead calm even when the winds were at 15 knots.

The anchorage is next to the dinghy dock, and it was such a short distance that we didn’t bother putting the outboard on our dinghy.  There was a dumpster to put garbage (Yay!  There wasn’t any garbage disposal at Coecles) and free hot water showers!  Mattituck was starting to look like a perfect stop for cruisers.

Since we arrived just before sunset and we had a few days to spare, we decided to make the long trip up the creek worth it by sticking around the next day.  When we woke up Friday morning it was raining.  Of course.  What else is new?  Fortunately it had stopped by noon so we rowed to the dinghy dock and walked the five minutes into “town.”

We had fun browsing in several independent shops on Love Lane, including a cheese shop, a sweets shop, and a hardware store, and a great Italian grocery that reminded us of D&D Market in Hartford (but with Long Island prices).  We also had a good breakfast at Love Lane Kitchen, just beating the rush.

It was a lovely way to spend the afternoon, and it felt GREAT to get off of the boat for awhile after being boat-bound for the past several days in Coecles.