Sunday dawned cold and cloudy with temperatures in the low 50’s.  Knowing that Monday was going to be sunny and mid-60’s, our plan was to leave our mooring in Beaufort, head down the ICW for a few miles and anchor for the rest of the day.  This would keep us from having to pay another $20 for the mooring just because we were feeling wimpy from the cold weather.  Of course once we got started we figured we might as well keep going.  We motored for another 20 statute miles before anchoring in Skull Creek and warming up down below with some hot chocolate.

The next day we moved on to the Herb River, which is where we had planned to anchor while we visited Savannah.  We had read that marinas in Savannah itself were very expensive ($3+/foot) and the river carried a lot of debris from the strong currents.  People looking to spend a bit less either anchor in the Herb River or stay at a marina in Thunderbolt or the Isle of Hope.  We were already planning to spend a few nights at the Isle of Hope Marina so we could visit my Uncle Ken and Aunt Sharon, so we decided to anchor for free for a few nights first.

The anchorage was only a 20 minute dinghy ride to Thunderbolt Marine where we paid $5 to leave the dinghy for the day.  From there it was a short walk to a bus that would take us into Savannah.  We had been looking forward to seeing Savannah for a while, and it was a lovely sunny day with temperatures in the mid-60’s.

Everyone we met who heard we were going said, “I love Savannah!  It’s so beautiful!”.  I guess that’s why I’ve been pondering it quite a bit since our visit.  It was undeniably beautiful.  The downtown area was very walkable with 22 squares that are basically mini-parks, plus Forsyth Park which is much larger.  The squares were lovely, and everywhere you looked there was a beautiful house or building:

There was an outdoor shopping/restaurant area that reminded me a bit of Quincy Market in Boston, plus a long walkway along the river with more shops and restaurants.

Great old stairs leading down to the river; one of the 22 squares.

But there was something about Savannah that I still can’t quite put my finger on.  The streets were strangely quiet.  I realize that it was during the middle of the workday, but Hartford has a smaller population yet is more bustling at the equivalent time. Jeff thought it was because I’m not used to a real southern town, but it’s not like it was the first southern town we had been to.  Maybe it was the fact that the downtown restaurant and shopping areas seemed really geared to tourists as opposed to residents.  We aren’t really shoppers anymore, and we limit going out to restaurants because of the sodium issues.

Whatever the reason is – and I’m sure I am undoubtedly in the minority in this opinion – but it felt to me like it had no soul.  It was nice to see it, but it’s not somewhere that I feel a need to revisit in the future, at least not for a while.  I’ll duck now while the Savannah-lovers throw tomatoes at me.

After Savannah we moved on to the Isle of Hope marina so we could more easily visit with Ken and Sharon.  We had chosen this marina based on a recommendation from our friends on S/V Minx, and it was great.  Located directly on the ICW, we saw dolphins every day.  I even saw one jumping completely out of the water one day, which was very cool! 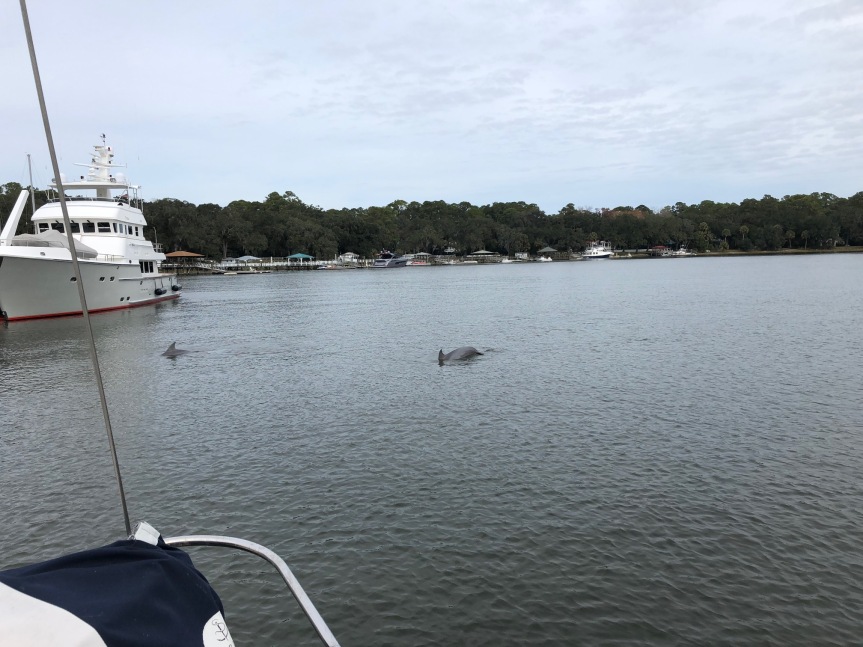 We had a great visit with Ken and Sharon, and even though the weather was lousy we had fun hanging out on the boat catching up.  They kindly treated us to lunch (Sandfly BBQ – the best barbecue we’ve had so far on this trip, except perhaps for the fundraiser in Elizabeth City), and they took us around to West Marine and Kroger’s so we could pick up a few items.  It was so nice to see them, and we are looking forward to doing it again when we come back up north in the spring.

With that we were off again, making tracks south as quickly as we could.  Our next destination was going to be Cumberland Island which I had been looking forward to seeing since the beginning of our trip.  Our first anchorage was only 22 statute miles away because we needed to make sure we went through Jekyll Creek with sufficient water.  Jekyll Creek has not been dredged in years, and with a low water mark shallower than our draft it was important to get the timing right.  We threaded through Jekyll Creek without incident as part of a 50+ statute mile day, anchoring in Wallys Leg for the night.  I love the names of these creeks!  We were treated to a beautiful sunset and an even prettier sunrise:

A slightly shorter next day (combined with a current in our favor most of the way) had us arriving in Cumberland Island around 2:00 p.m.

I had wanted to spent several days at Cumberland Island, but unfortunately mother nature had other plans.  A big storm was coming with forecasted wind gusts of over 35 knots.  The anchorage at Cumberland wasn’t going to give us any protection at all based on the wind direction, so we were going to have to leave the next day much to my disappointment.

I tried to convince Jeff that we could go back to Cumberland after the storm passed, but he said there was no way he was going backwards.  I couldn’t really argue with that, so we made the most of the remaining daylight, walking on a trail to the beach, getting a glimpse of the wild horses, and seeing just enough to know that we most definitely want to return for several days in the spring.

The trail leading to the beach was lovely: 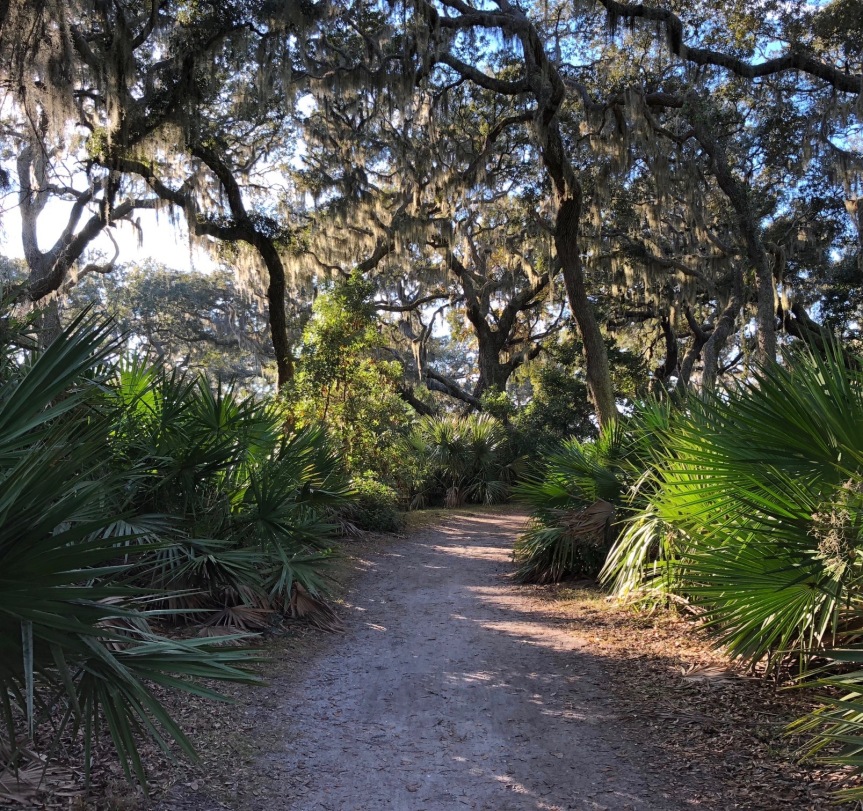 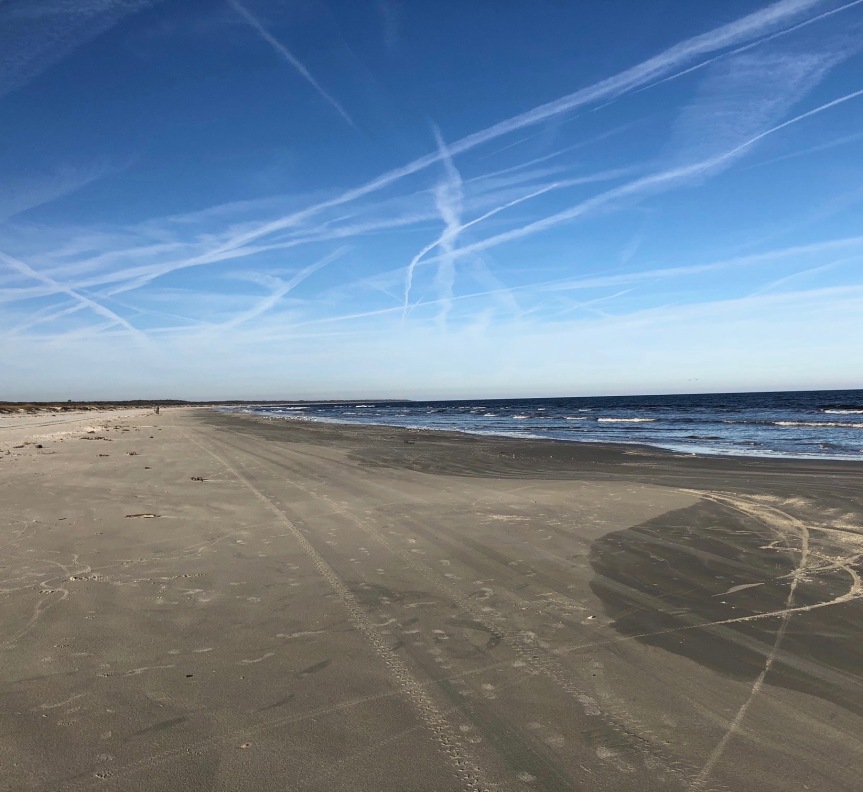 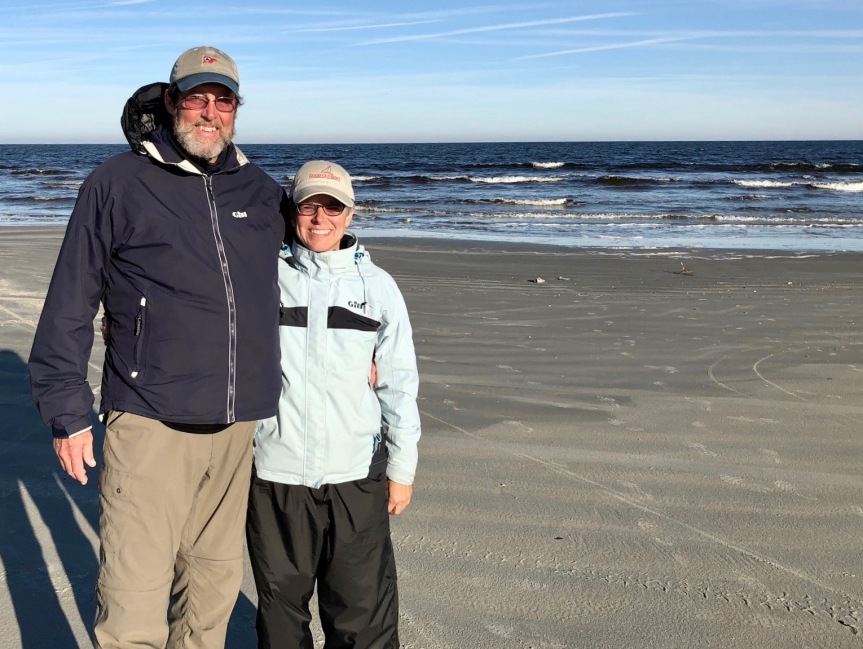 We were excited to be once again sharing an anchorage with our friends from S/V Minx, so we had dinner that night on their boat while we talked strategy as to where we were all going to hunker down for the storm.  We also got some great tips from Jay on future anchorages in Florida.  Climbing back into our dinghy at cruiser’s midnight, we waved goodbye knowing that we’d be seeing each other again soon in St. Augustine.