As Jeff and I were walking to an auto parts store in North Miami to find carburetor cleaner for the dinghy outboard (the subject of another post), I took note of the fact that it was December 29th and I was warm.  It was cloudy but there was a warm breeze, and I was perfectly content.  I turned to Jeff and said, “I’ve found my maximum latitude.”

I’ve written before that we are chasing the warm weather.  We aren’t going to live on our boat forever, and something we frequently ask ourselves is where we might want to live when we’re finished.  Annapolis is great, but it’s too cold in the winter.  We love Beaufort, SC but again, it can get pretty chilly.  St. Augustine?  Getting better, but it still occasionally has lows in the 30’s.  Vero Beach?  Better still, but the average low in January is 51 degrees.  But now we’re in the Miami area and I can feel it in the air.  If we’re living on the east coast, this is the furthest north I want to be.

Last year we only went as far south as West Palm Beach, FL before crossing over to the Bahamas.  This year the weather systems have been much stronger and more frequent, with crossing opportunities proving to be few and far between.  Rather than hang out in Vero Beach or the Palm Beach area while we wait, we decided to head farther south.  We’ve never been to Miami and we wanted to check it out, and given that we plan to focus on the Exumas this time it made sense to make some more southerly progress while we wait.

Unfortunately, the same weather making Gulf Stream crossings difficult also meant that we needed to travel south down the ICW from West Palm Beach versus hopping outside.  The wind had been relentless for days – mid-teens with repeated gusts to the mid-20’s – but the water was more protected than outside.

We had read that West Palm to Miami was an irritating stretch of the ICW.  There are 27 bridge openings (29 bridges for boats with a mast over 55 feet – hooray for our small Pegu Club!), and while the opening times are coordinated, it only works for boats that can travel at over 6.5 knots.  Pegu Club can’t do that while motoring without help from the current.  That meant that we were going to need to go wide open throttle when the current was in our favor, or putter along at under 4 knots so as not to end up circling for 30 minutes.

Ultimately nothing prepared me for how irritating the stretch between West Palm Beach and Pompano Beach would be.  It now ranks as our least favorite day on the ICW – ever.  There was nothing to look at but gaudy mansions, despite it being a Friday there was a ton of boat traffic (our theory was that since Christmas fell on a Wednesday many people took the rest of the week off), and the narrowish channel meant that the wakes bounced back and forth, back and forth off of the walls.  The radio constantly crackled with everyone calling the bridges on channel 9.  As the day progressed the boat traffic grew increasingly heavy so that for the last several bridges we were part of a large flotilla waiting and circling at each bridge.  Jeff didn’t mind it so much, but I found it stressful and it made me very cranky. 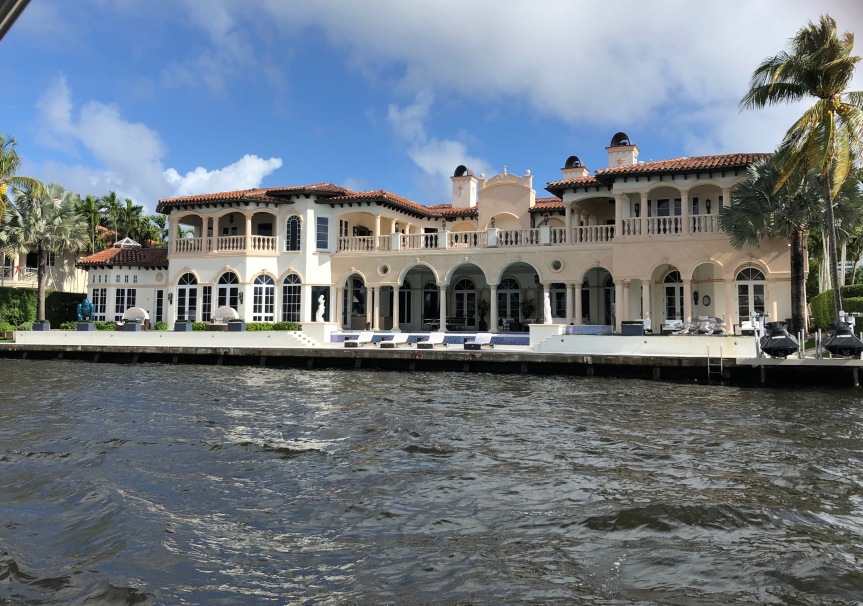 At the end of the day we pulled into an adequate anchorage, but it was somewhat exposed to wakes from the speedboats going down the ICW.  As we drank a well-deserved glass of wine, we debated what to do.  We had been warned that the boat traffic was even worse on the weekend, but if we could suck it up for 20 miles and 9 bridges, we could anchor in Oleta River State Park which was very protected and quite lovely (according to our friends on S/V Duchess).  The forecast the next day called for clouds and showers.  Maybe if we raised the anchor at sunrise we could get a jump on the traffic, and the forecast might keep the yahoos down.  We decided to go for it.

It ended up being the right call.  The difference from the day before was amazing.  Boat traffic was relatively light, we had the current in our favor so we only had to putter along slowly for one bridge (which in hindsight we could have made at wide open throttle), and we dropped anchor by 1:00 in a much better spot than “Lake” Santa Barbara had been.  We were thrilled.

While we still have another 12 miles to get to Miami, it’s only three bridges and we will do it during the week so it shouldn’t be too bad.  In the meantime we are thoroughly enjoying the Oleta River park.  The anchorage is well protected and there are plenty of walking trails.  It was busy during the weekend with day trippers, but we had fun listening to the Latin music pumping from the boats, smelling the fantastic food people were cooking, and watching how happy people were to be out on the water.  If Miami is anything like this, I know we’re going to love it.