After spending a week at Cumberland Island waiting for the weather to clear up, we finally decided that since we were in the south with summer approaching it simply wasn’t going to happen.  Time to continue moving north.

Every day the forecast called for at least a 40% chance of thunderstorms, and every day we were lucky and didn’t have any.  I bought a book about cruising in Georgia for the Kindle and it looks like there are SO many areas off of the ICW to explore.  Unfortunately with hurricane season approaching we couldn’t really take advantage of it, but we are armed with knowledge of some new spots we’d like to see when we make our way south again in the fall.

In the meantime we mixed it up a bit.  Instead of backtracking out of the anchorage at Cumberland, we continued winding up the Brickhill River until it rejoined the ICW.

Crossing St. Simons Sound near Brunswick, GA, we could still see the car carrier that had capsized and caught on fire last September.  It carried 4,000 Hyundais and Kias, and is in the process of being cut into eight pieces and removed.  The goal was to have it removed by hurricane season, but it looks like there is still quite a ways to go.

That afternoon we detoured up the Frederica River and anchored by Fort Frederica, which was a cool view and the first time we’ve anchored by a fort.  We had wanted to explore the fort the next day, but the dinghy dock is only accessible with higher tides and we were at dead low at 9:00 a.m., so we’ll try in the fall.

Again, instead of backtracking we continued up the Frederica.  We bumped the bottom at the entrance to the ICW but it’s only mud so it was all good.  The tides in Georgia swing from seven to eight feet so even if we had run aground, we wouldn’t have had to wait long to start floating again.  I can’t begin to describe how much less stressful running aground is once you leave New England and its rocks!

Each evening we tried to anchor in an area where our mast wouldn’t be the tallest thing within miles, attracting every lightning bolt in the area.  It was Georgia so we only had modest success.  On the other hand, we didn’t get hit by lightning so I guess we were successful after all!

There are eight sounds that need to be crossed when traveling through Georgia.  Because they are so shallow they all get very sporty when the wind is over 15 knots, particularly when the wind is against the current, and we’ve been tossed around on a few of them in the past.  This time, however, the wind was always well under 15 knots until the last day so it was actually our most pleasant trip through Georgia to date.

With some weather approaching our original plan was to stop in Isle of Hope just south of Savannah and do a bit of exploring, but the marina was booked solid.  As their manager put it, Covid had really messed up the typical schedule.  Cruisers were still moving north much later than usual (like us), while summer season boaters were arriving to claim their slip.

With Isle of Hope not an option, we decided to put in a long day instead and get to Beaufort, SC, racing against the incoming weather.  That’s when we had our only hiccup on the Georgia sounds.  We were crossing Port Royal Sound with the current VERY much against us, and the wind was on the nose at a steady 15 knots and increasing as the weather system approached.  We had debated calling it a day and anchoring before crossing, but it would have meant hanging around for a few days waiting for the conditions on the sound to subside.  We decided to open up Big Red to wide open throttle and go for it.

This wouldn’t normally be an issue.  BUT it was over 90 degrees that day, and one of the cowlings that pushes air into the engine area had blown off in a storm a few months ago and we hadn’t yet bought a replacement.  That’s when we discovered that the hot engine temperature buzzer works.  So much for scooting quickly across St. Catherine’s Sound.

The wind speed on the nose increased to over 20 knots, along with the fetch, as we nudged along barely making three knots at only 2,000 rpms.  If not for the approaching weather we would have just tacked our way across under sail, but it would have taken much longer even though we were barely making three knots with the engine.  Finally, finally, we were on the other side.  It hadn’t been our smartest move, but all was well.

We anchored just south of the Ladies Island Bridge in Beaufort and checked into Ladies Island Marina the next day.  I adore Beaufort and frankly once we got there I didn’t want to leave.  We had never stayed at Ladies Island before, but everyone at the marina was amazingly friendly.  There were two courtesy cars so we were able to take care of some errands, stock up on provisions, and give Pegu Club a thorough deck scrub.  We had breakfast with our cruising friends on S/V Barry Duckworth, and breakfast again a few days later with our friends on S/V Mer du Jour. We hoovered down our favorite tomato pie from Low Country Produce.  We wandered into town each day and shared a sweet tea float while sitting on a swing watching the river go by. 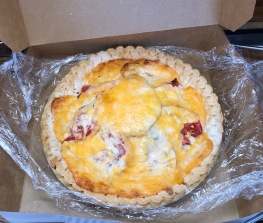 I was strongly advocating for spending at least the rest of the summer there.  It was something that we had debated when we were there last fall but back then we decided against it because of the hurricane risk.  Now I was willing to take the gamble.  I wanted to stay put, maybe pick up some work, and plug into the community for awhile.  And then we spoke to two fellow boaters at the marina, both of whom had been in the area for Matthew three years ago.

One person had an impeccable Bristol 41.1.  It was truly in bristol condition.  We found out that it looked so good because it had undergone seven months of repairs after being one of only 28 boats to survive Hurricane Matthew at his then-marina a few miles away.

The other boater owned a catamaran.  Ladies Island Marina has a policy requiring boats to leave the marina when a hurricane is coming.  With a catamaran he said he didn’t have anywhere else to go, so he stayed at the dock.  His boat survived, but the dock came within inches of floating off of the piling.  If the hurricane had come at high tide, it would have been game over.

That was all I needed to hear.  Although my soul wanted to stay (as my friend Vanessa so aptly put it), we just couldn’t bring ourselves to take that risk with Pegu Club.  So it was with regret that we moved on after a week and continued making our way north.  However, Beaufort is one of the top three places where we could see ourselves living when we return to land life – even if it does get a bit nippy in the winter!

2 thoughts on “I wouldn’t be surprised if we live in Beaufort, SC some day.”