After leaving Oriental we made steady progress north.  We reluctantly decided to skip our beloved Belhaven, which is the first time we’ve missed it.  Unfortunately Covid cases were increasing in North Carolina and from what we could observe on Facebook, Belhaven residents weren’t fans of masks.  Sadly, if that attitude remains Belhaven will have to be a pass for us until Covid is somehow resolved.

We had a sporty ride across the Albemarle (it’s a large, shallow body of water so every time a gnat farts a nasty chop kicks up), spent several days sweating it out in the Dismal Swamp Canal, and rode out the Fourth of July weekend anchored at Hospital Point by Portsmouth, VA.

The reflection on the water on the Dismal Swamp was stunning: 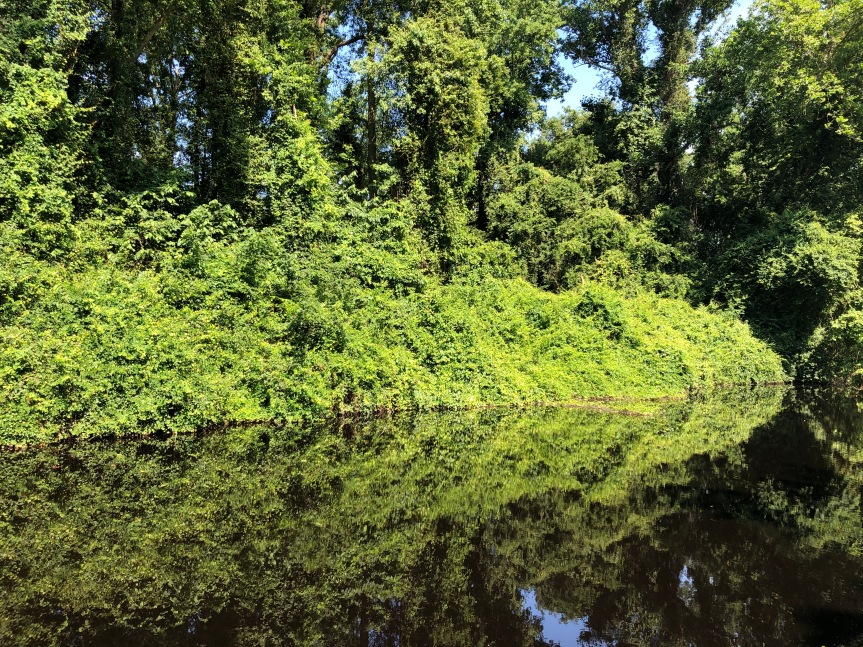 Hospital Point actually turned out to be a really good choice for the holiday weekend.  We had never anchored there before, but it’s a no-wake zone and thanks to all of the military work being done in the area, it’s well patrolled so boaters actually abide by the no-wake rule.  As long as the wind is cooperative, we’ll definitely be stopping there again in the future.

After we left Hospital Point we had several wind-free days as we worked our way up the Chesapeake, stopping in our regular anchorages.  Regular readers may recall our back and forth debate as to where to go for the summer, eventually choosing Annapolis.  So where did we actually end up?  Cambridge, MD.

After posting about our decision to go to Annapolis for the summer, cruising friends of ours on S/V Aurora suggested Cambridge (where they have a house).  Located on the Eastern Shore of the Chesapeake, Cambridge has a very affordable marina with good reviews, a small grocery store within easy walking distance and a larger Food Lion two miles away, and a cute downtown.

The marina website showed a monthly rate for a 35′ slip at $205, including electric, which sounded too good to be true, but a call to the marina confirmed that it was.  The rate in Annapolis was going to be $635/month plus electric.  With a savings of $1,000 over two months (taking into account our anticipated electric usage) it was a no-brainer.  Cambridge it would be!

Once our reservation was set we texted our cruising friends on S/V Barry Duckworth to tell them about it, and they promptly made a reservation too.  Between Aurora, Barry Duckworth, and Pegu Club, it was going to be a reunion of the cruising class of 2018.

We knew we were taking a bit of a risk booking a two month stay in a place we’ve never been, but it’s actually worked out quite well so far.  Cambridge is cute, the marina has been fine (with spotless showers and restrooms) and it’s been nice having friends here.  Staying in one place at a marina is also giving us a chance to take care of some long-delayed projects (the subject of future blog posts).

Of course by the time mid-September rolls around I’m sure we’ll be more than ready to move on.  But the question is where will we go?  It’s a topic of frequent discussion on the S/V Pegu Club, and it changes several times a week with every update of the news.