As our final weekend before splash approached we compared our to-do list with the available hours in a weekend, and braced ourselves for a Very.  Long.  Weekend.  Fortunately we got off to a flying start when we received a call from John Bayreuther on Thursday letting us know that the rudder stuffing box was finished!

John told Jeff that it took a 10 ton hydraulic puller to break it free (apparently it made quite the loud pop when it came loose) but all was well now.  After hearing that, we felt a lot better about not being able to free it ourselves.  It’s funny – our boat neighbors at Shenny asked us that weekend if we were all set, and when they heard what Bayreuther had to do to free the box every single one of them commented on how we must not have felt inadequate after that.  I guess we’ve all been there at some point!

As we drove down bright and early on Saturday, we were excited to see how the rudder post and new hose looked.  What a difference: 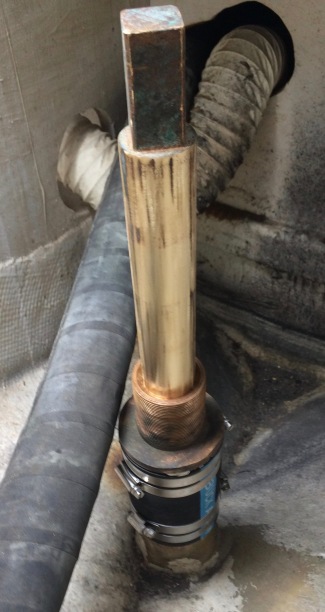 We marveled at how shiny the post was, and the condition of the new hose compared to the old: 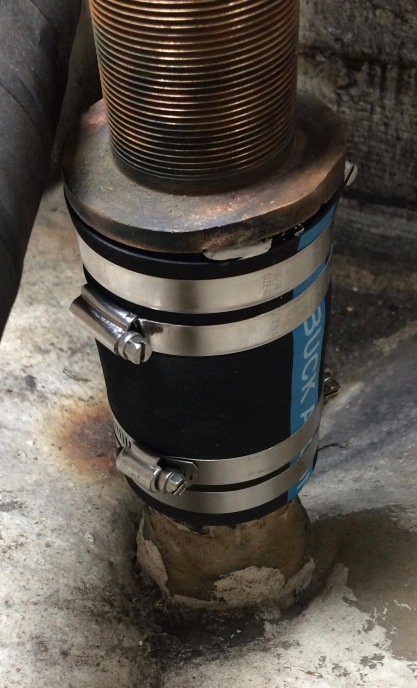 Now the post turns while the hose and the stuffing box stays stationary, just like it’s supposed to!

We weren’t quite finished with this task, however, because we still needed to put the stuffing in and put everything back together.  While I started taping off the bootstripe to get ready for touching up the bottom paint, Jeff used the Dremel to sand the corrosion off of the other bits.  Deciding he was on a roll, he also cleaned up the steering drive wheel while I cleaned and filled our water tanks and inspected the steering cable. 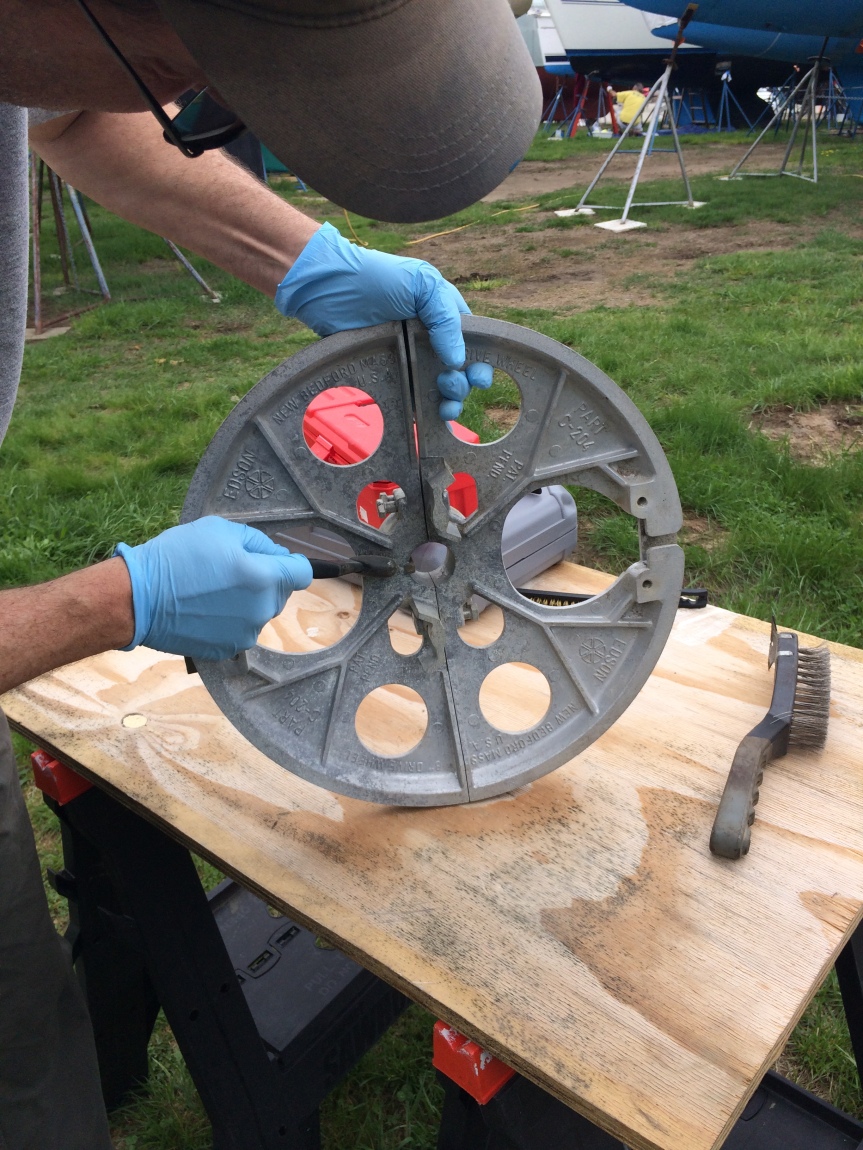 We were planning to replace the chain and wire for our steering, but we’re hitting that point in the pre-season where tasks are being prioritized by whether they can be completed when Pegu Club is in the water.  The cables appeared to be fine, so we’ll take care of it later.  Now all we needed to do was put it back together.  It wasn’t going to take too long and we could move on to the next task.  Famous last words.  Four hours later we were finished.  What happened?

Well, putting the flax into the nut was easy enough, and reassembling the parts onto the shaft was fine.  The trouble came when we tried to reinstall the wood block that goes over it.  Try as he might, Jeff could not get the bolt holes to line up.  Of course he had to do it blind because he couldn’t get his head down into the small space to see them, but every time he put the screwdriver in the hole to check the alignment, he kept hitting solid wood.

Finally I suggested that maybe the new hose was too long.  Nope.  But in comparing the lengths of the old and new hose, Jeff realized that it was about 1/2″ higher than it had been.  Grabbing the cast iron sleeve that we had made a few weeks earlier, he gently moved it down.  After we got excited once again that the stuffing box was no longer corroded to the shaft (yay!), the holes were finally aligned and everything else went smoothly after that.  After a few weekends, many hours, and with $500 less in our bank account, we can finally cross that maintenance task off of the list!

Next up was to install the raw water strainer thruhull and seacock.  When we first bought Pegu Club we had replaced all of her thruhulls and seacocks with the exception of this last one.  We knew that putting a backing block on would be tricky because of the hull’s curve, but it proved more problematic than we anticipated.

Jeff used a sander to shape the backing block which helped a lot, but in doing so the nuts that go in the backing block were no longer flush with the backing block.  Oops.  Some debate followed as to whether we could use a different backing block or whether we needed one at all, but finally we decided to buy another one.  We knew that it wouldn’t be able to sit completely flat on the hull, but we decided something was better than nothing.  Unfortunately buy the time all of this occurred, Defender was closed for the day.  Looks like this task would have to wait until Sunday.  Time to go home.

Saturday was sunny and warm with the temperatures pushing 80 degrees.  Everyone in the yard was in a good mood, enjoying working on their boats in the beautiful weather.  Sunday was a different story.  It was cloudy, it was windy, and it was cold – mid 40’s.  My good mood was hard to find.

As a native Southern Californian, I can’t even begin to describe how sick I am of the weather here.  When I first moved here 28 years ago everything was new and fresh, and I would have said that the weather was nice for a solid six months – May through October.  Since then my tolerance has crashed, and at this point I would say it’s nice for four months, maybe five – late May through early-to-mid October at best.  That is not a ratio that works for me.  Spending over 50% of the year not being able to wear shorts and a t-shirt simply sucks.  At least once a week we debate whether to leave early – a conversation driven in part by the freakin’ weather.  O.k.  Rant over.  Moving on to Sunday….

First up was to put four coats of barrier coat plus one coat of bottom paint on the keel repair, touch up the bottom paint on the rest of the boat, and spray anti-fouling on the propeller.  Once that was finished, we absolutely had to get the thruhull and seacock installed.  Without it, we couldn’t go in the water.

New backing block in hand, we proceeded to dry fit the installation.  Try as Jeff might, he could not get the seacock lined up so that we could turn the handle without the hull getting in the way.  It was working the day before because by shaping the backing block the seacock threaded down just a bit farther.  Now the backing block wasn’t shaped and everything was off by just that little bit.

After many attempts which involved my repeatedly climbing up and down the ladder and spending way too long out in the cold air on my knees with my arms above my head holding the thruhull in place, we were at a crossroads.  If we used the backing block we wouldn’t be able to bolt the the seacock onto it, because the only way to have clearance for the handle was to rotate the backing block around 15 degrees.  We could skip the backing block altogether, but then we still wouldn’t have anything to bolt the seacock into (we didn’t want to drill holes into the hull).

I wasn’t crazy about not having the seacock bolted down, but Jeff pointed out that it was installed that way when they made the boat.  It had already worked for 40 years, and nothing was going to crash into the seacock in the bilge anyway.  So it was decided.  After using a plethora of 5200, the installation was finished.  If we decide we truly aren’t comfortable with the installation we can always reinstall it next winter by drilling holes in the hull.

By now we were cold and tired, but we still needed to change the fuel filters.  Jeff suggested that we wait until the following Saturday, but I was concerned that since we had never done it by ourselves we would be feeling the time pressure if we waited, so we decided not to put it off.  Big mistake.

It should have been a relatively quick job.  Change the filter, bleed the engine, finished.  After all, we had watched John Bayreuther do it the previous winter.  First we discovered we didn’t have the proper strap wrench to remove the filter.  A quick trip to Shenny’s tool shed took care of that problem.  Then it took a while the find the tiny lever that you pull to bleed the air out of the engine.  Jeff had placed the oil absorbing pads around the area to catch the fuel that was going to spit out, so he sat down and started moving the lever.  And moving it.  And moving it.  And moving it.  Where was the fuel?

Now it was Jeff’s turn.  After a while he looked at me suddenly and said, “Did we open the fuel cock?”  Doh!  Fuel can’t get into the filter if the fuelcock is closed at the tank.  We had just wasted almost an hour trying to achieve something that was literally impossible.

After another hour I gave in.  Jeff removed the oil absorbing pads only to find that there was quite a bit of fuel on it.  Hmm.  That was strange.  It had bubbled a little bit, but not enough to warrant that amount of diesel.  Turning the key to finish filling the fuel filter bowl, Thumper immediately roared to life.  Whoa!  Turn it off!  (Remember, there wasn’t any water hose hooked up).  We stared at each other.  Usually it takes the engine a second or two to start, but this was instantaneous!  Looks like there wasn’t any air to bleed out.

Ultimately we decided that based on the amount of diesel on the pad, it must have been spitting out from behind where we couldn’t see.  In fact, it had probably been spitting out for at least the past hour.  Sigh.  Live and learn.

With that finished we were truly tired and frozen.  The yard was virtually empty as we quickly packed up and drove away, pleased that Pegu Club was now ready to get back into the water.  Launch day is Saturday at 3:00.  We can’t wait – well, except I’m still dreading that pesky docking thing.