Although I was concerned about the windy forecast for our first attempt at docking, we drove down to Shenny with great anticipation.  It had been a long offseason and now we were going to splash!  With Pegu Club about to be in the water, we were going to begin my happy time of the year as I like to call it.

We had two things to accomplish before splash: running Thumper for ten minutes, and getting the mast ready.  First though, I wanted to watch some Shenny friends (who were splashing that morning) bring their boat into their slip.  Since we’ve never had a slip before, I wanted to see what lines they had ready on the dock vs. which ones they took care of as they were coming in.

As their boat came in, I was surprised to see that the piling moved as they bumped up against it.  Wait a minute?  They move?  I didn’t realize that!  One of the reasons I was so concerned about docking was I thought if you hit a piling it’s like hitting a piece of concrete with no give.  Once I realized how much the pilings wiggle, I started feeling much better about this whole docking thing.

Back on Pegu Club, we prepared to get Thumper running.  John Bayreuther (the diesel mechanic we use) had told us last year that after we change the filters and bleed the engine, we should run her for 10 minutes at high idle before we splash her.  Having changed the Racor filter the week before and bled the engine, we filled our 5 gallon Home Depot bucket with water and had the hose at the ready for refilling it as needed.  Jeff put the raw water intake hose into the bucket, Thumper fired up, and I started the timer.

All was going well.  She sounded normal (i.e. loud as hell), water was coming out of her exhaust, and we continued to count down.  I was flashing hand signals to Jeff rather than yelling so he could see how much time we had left.  I gave him a 1 to let him know that we had one minute to go.  Thirty seconds later, Thumper’s revs dropped and she died.  Hmm. This had never happened before.  We made several attempts to start her, with no avail.  O.k.  This was mildly concerning, but we still had several hours before our launch time.

One of the few things we know about diesels is that if they don’t run it’s almost always because of either fuel or air.  She had new filters and a full tank of diesel, so we turned our attention to air.  Back to flicking the stupid bleed lever.  Flick, flick, flick.  One of our Shenny friends (who is also named Jeff) came over to see what he could do to help.  Through him we discovered that we had unscrewed the wrong bleed screw last week (and that morning), which would explain why no fuel ever came out of it.  Lesson learned, we got fuel squirting out of the right place and moved on to the next spot.  Trying to start the engine again, we discovered that Thumper still wasn’t giving us anything.

Various bits of trouble shooting followed as the time ticked by, along with a phone call to John Bayreuther. He called us back and was fantastic, walking us through everything step by step, asking us to text him pictures of each area to make sure we were fiddling with the right bits, etc.  Still no love from Thumper.

Finally we were forced to concede that we weren’t going to make our launch slot.  John said that he would try to come by the yard this week and if it was something quick he could take care of it then, but otherwise it would have to wait because he was slammed.  In the meantime we went to the package store to provision Pegu Club’s booze locker and started debating our options.

That night was Shenny’s Cinco de Mayo party and it seemed like half of the club knew of our woes.  The general consensus based on the current symptoms was that we likely had a clogged injector.  More discussion and thinking followed.

By Sunday Jeff and I had pretty much decided that we were going to text John and let him know that rather than diagnosing and repairing the problem, we were going to get a new engine.  We had already planned on installing one this winter, so it didn’t make any sense to spend money to fix something that we were going to be replacing soon anyway.  Of course this decision meant that we would not be going into the water any time soon.  Sigh.

In an attempt to make lemonade out of lemons, we started thinking about all of the projects that we can get finished in the meantime.  The amount of time that we have left before we permanently cut the lines is going to fly by, so we decided to take this opportunity to cross as many items off of the to-do list as we could.  We would still drive down to Shenny every Friday and spend the weekend on Pegu Club like we normally would.  The only difference is that we would be climbing a ladder to board her and we wouldn’t be sailing.  We can take Pegu-teeny out sailing whenever we’d like however, so at least we could get a sailing fix in every once in a while!

Decision basically made, Jeff and I spent Sunday working on various tasks.  One of the things we want to do during this hiatus is to paint the inside of the cabinets and the lazarettes.  Since Pegu Club is going be our home, we’d like to have her as cosmetically spiffy as we can.  Jeff spent several hours scrubbing out the starboard lazarette which had been disgustingly dirty from engine grime, and I prepped the coir for our Nature’s Head and made sure the starboard interior lockers were ready-for-painting clean.  We also spent some time tracing electrical wires with the thought that if Pegu Club isn’t back in the water by our vacation at the end of June, it would be the perfect block of time to replace her wiring. 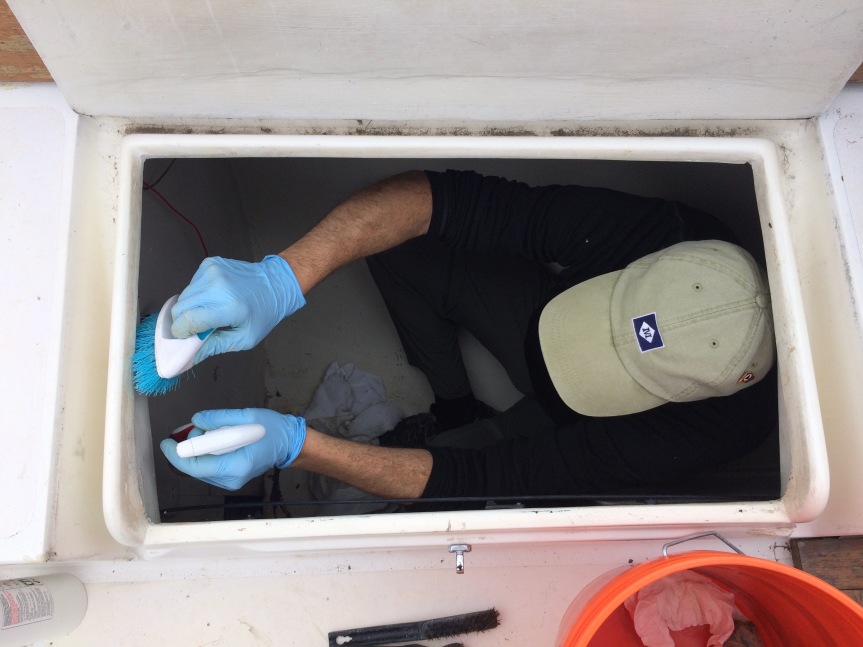 Driving home that evening we were most definitely disappointed that the weekend had not turned out as planned, but knowing we would be back on Friday helped.  In the meantime, we had some engine details to work out.